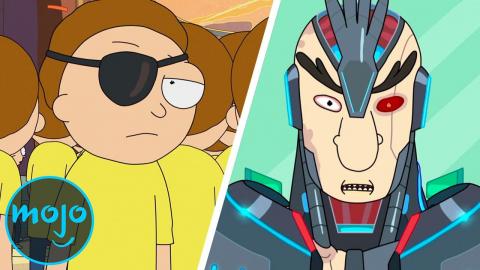 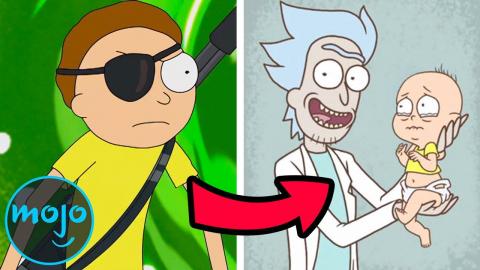 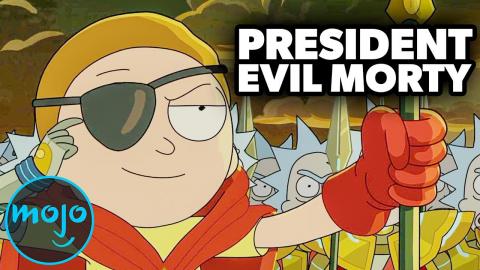 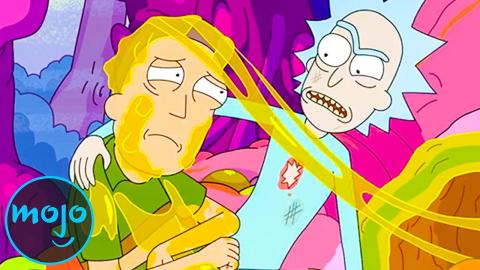 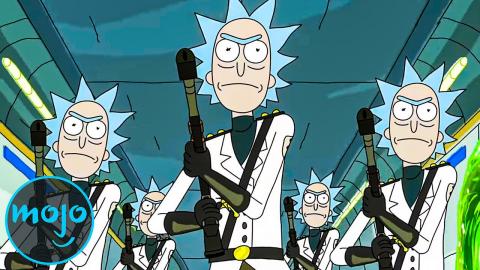 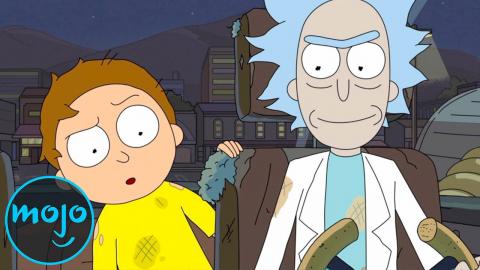 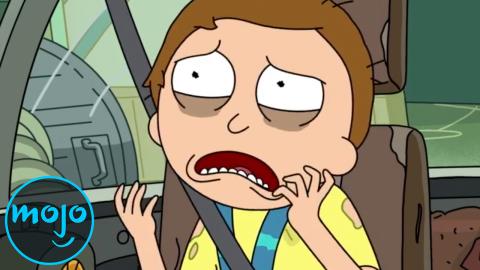 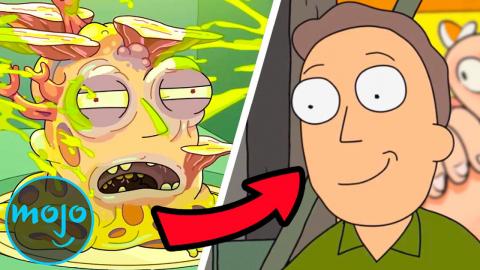 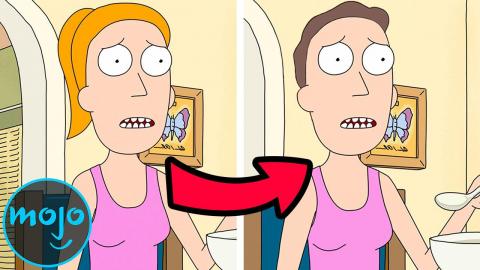 Top 10 Crazy Things You Never Noticed in Rick and Morty 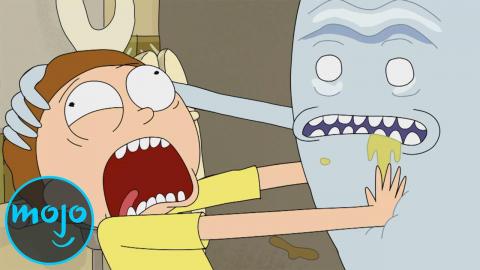 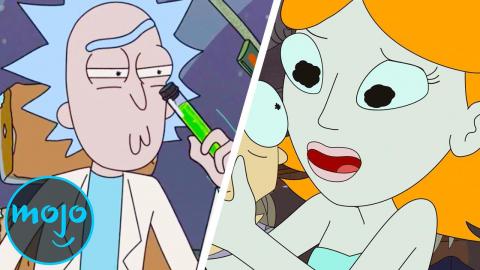 Top 10 Things Rick and Morty Get Right About Science 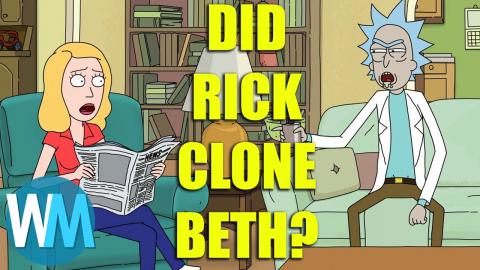 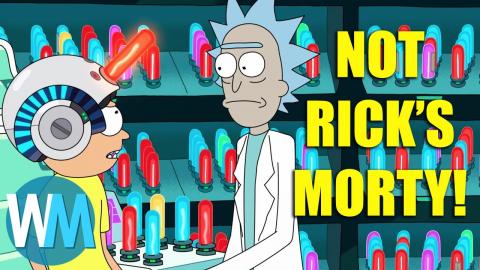 VOICE OVER: Rebecca Brayton WRITTEN BY: Andrea Buccino
Season 4 of Rick and Morty better answer some of these unanswered questions because we've been waiting to long for them to remain unknown. Welcome to Watchmojo, and today we're exploring some of the most pressing questions from Rick and Morty. For example, What Is Evil Morty's Plan? What happened to Birdperson? Is Beth a Clone? Did we miss any important plot questions to discuss? Let us know in the comments!
Transcript ∧

What is a plumbus? And what does it even do? Welcome to WatchMojo, and today we’ll be discussing the Unanswered Questions in Rick and Morty.

For this list we take a look at some of the most pressing questions raised by the first three seasons of the show. Will Season 4 give us any answers?

What Happened to Beth's Mother?

Growing up as the daughter of mad, psychotic genius Rick Sanchez must sure be tough for a little girl. But what about Beth’s mother? The only time, at least so far, we’ve had a chance to catch a glimpse of her, was in the first episode of Season 3. The problem is that not only was the scene a flashback Rick himself was witnessing, but part of a ridiculously elaborate trap he set to take revenge on the Galactic Federation. And you thought he was trying to redeem himself at the end of Season 2, right? We may never see Rick’s wife again, but that certainly won’t stop the fanbase speculating about what happened to her.

What is Rick's True Origin?


And speaking of speculation and character origins… What about Rick himself? And no, we don’t mean the absolutely insane “Doc and Mharti” short that served as inspiration for the actual “Rick and Morty”. The flashback that showed us his wife in “The Rickshank Rickdemption” was also the only moment in the show resembling a proper backstory for Rick. But if it was all a lie he cooked up for vengeance, how did he become the dangerous sociopath we all know and love? If Rick C-137 didn’t lose his family in that explosion, when did he invent the portal gun? And what sucked him into the depths of the nihilistic abyss he calls life?

With a few visual cues taken from Tarantino’s “Pulp Fiction” and a Morty a little too cool to be true, “Oh Mama” made for a nice change of pace and a great “Rick and Morty” short. But does it fit anywhere in the canon of the show? Are these even the C-137 Rick and Morty? Sure, the multiverse contains infinite possibilities, but that doesn’t mean it contains each and every one of them. As much as we would love to see at least a couple of references to the video in the upcoming season, seeing Rick wear a seatbelt does seem a little too out of character. And anyway, what’s in the box?

Are Rick and Morty Both Really C-137?

With all the inter-dimensional travel our heroes get up to, things can get a little confusing. Good thing we have Rick to tell us what’s what. Except he’s a sociopathic liar with no real human attachment and a god complex. So can we believe him when he says they’re the Rick and Morty from C-137? More importantly, are they even each other’s Rick and Morty? When Rick identifies himself as C-137 to other Ricks, the whole Citadel believes him: but our Rick being the Rickest of them all, he could simply be fooling everybody. We’ve seen that jumping ship and switching universes is not something that would phase Rick much at all, so the question remains unanswered.

What is Evil Morty's Plan?

He first appeared in Season 1, revealed to be the mastermind behind the Rick murders and Morty kidnappings for which Rick C-137 was being framed. His plan didn’t quite work out, but he was never discovered, and a Morty clever enough to mind-control a Rick was sure to have another ace up his sleeve. Which brings us to Evil Morty’s return in Season 3, where he manages to be elected President of the Citadel, immediately turning it into a dictatorship. And so far that’s all we know. What is his plan? Will Season 4 shed light on Evil Morty’s motives and goals?

One of the few recurring characters in the show outside of the protagonists’ immediate family, Birdperson was incapable of expressing any sort of emotion through speech. He was also Rick’s best friend and a fan favourite, which made his death quite the unexpected blow. After his new wife Tammy revealed herself to be a deep cover agent for the Galactic Federation and shot him at point blank range in the finale of the Second Season, we all assumed Birdperson was gone for good. But in the post-credits scene of Season 3’s first episode, he was brought back to life as a cyborg: Phoenixperson. He and Tammy flew off in the distance, and we haven’t seen them since.

Is Beth a Clone?

At the end of “The ABC’s of Beth”, after Rick and her daughter spent some quality time together and came to the realization they’re probably just as bad as each other, Rick offers Beth a way out. He could clone her, leaving the clone on Earth while the real Beth goes off on adventures. Her decision is left ambiguous, which brings us straight to the next episode and season finale. After a serious identity crisis, Beth convinces herself she’s in fact a clone and tries to escape Rick with her family. When he finds her, he tells her she is his real daughter: he just wanted to shoot Jerry. But can we really trust Rick on this?
Comments ∧