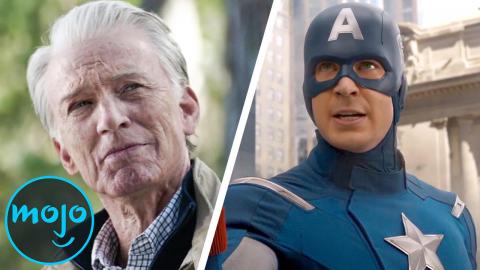 Avengers… Assemble! Welcome to WatchMojo and today we'll be counting down our picks for the Top 10 Captain America Moments in the MCU.

For this list, we're taking a look at Steve Rogers' defining moments throughout his MCU tenure. If you're not caught up yet, keep in mind there will be spoilers.

“Captain America: The First Avengers” is full of nifty special effects, although the most impressive feat was shrinking the hunky Chris Evans down into the scrawny Steve Rogers. Despite his diminutive size and hesitation from his superiors, Rogers proves that there isn't a more dedicated soldier in the U.S. military. Rogers is deemed a suitable candidate for the super-soldier experiment, a procedure that's not without risks since last time it created Red Skull. Even under these dangerous circumstances, Rogers makes a bathroom joke and insists on pressing forward when things look dire. Although the experiment could've veered into Frankenstein territory, our hero triumphantly emerges from the chamber, taller, more muscular, and ready to fight for his country.

Having survived the final battle, it appeared Steve Rogers may be sticking around longer than we expected. If you paid close attention during the 1970 sequence, though, it was clear that Rogers had a retirement plan in mind. Upon returning the Infinity Stones and Mjolnir, Rogers decided to remain in the past. When we see Rogers again in modern day, he's an old man who's lived a full life. It's a bittersweet revelation that's only made more poignant as Rogers hands his shield to Sam Wilson. This move divided some viewers who wanted to see Bucky take up Cap's mantle. Rogers' choice is met with approval from Bucky, however, which seems to give Wilson the encouragement to accept, making this moment feel truly earned.

“Civil War” blurs the lines between good and evil, challenging friendships and putting ethics to the test. The conflict revolves around the Sokovia Accords, which would give the United Nations control over the Avengers. Where Tony Stark feels the team needs to be kept in check, Rogers believes this will only create more problems. Thus ensues a gripping conversation that leaves the audience genuinely torn between Team Iron Man and Team Cap. We can understand where both men are coming from, seeing how Stark created Ultron and Rogers has been betrayed by his government in the past. While part of Steve is actually tempted to sign the accords, he can't bring himself to ignore a situation that's heading south, no matter what it costs him.

He may not be a super solider yet, but Steve Rogers still won't back down in the face the peril. When a bully corners Rogers in an alley, he tries to defend himself with a trashcan lid, alluding to the vibranium shield he'll later receive. No matter how hard the bully pummels Rogers, he refuses to give up, leading to a line that sums up his unbreakable spirit: “I can do this all day.” Although Bucky Barnes rushes to his rescue, it isn't long until Rogers becomes the one who's constantly saving Bucky. (xref) Even at the mercy of the Red Skull - or later, of his own teammate, Iron Man - Rogers will take a beating all day without surrendering.

Captain America's definitive line makes another appearance in “Avengers: Endgame” where Steve Rogers faces his most surreal foe yet: himself. Traveling back to 2012, Rogers comes face to face with his former self shortly after the battle for New York. 2012 Rogers jumps to the conclusion that his lookalike is Loki in disguise, as this isn't the first or last time the God of Mischief has impersonated Captain America. This leads to a humorous misunderstanding that forces the two Caps to square off with each other. With the same weapons and moves, the doppelgangers are almost equally matched in combat. Fortunately, modern Cap has knowledge of the future on his side, using Bucky's whereabouts to distract 2012 Cap long enough to knock him out cold.

As mentioned in our previous entry, Bucky did indeed survive his great fall. Brainwashed into becoming The Winter Soldier, Bucky is now a hollow – yet lethal – shell of his former self. Rogers still believes that his friend is in there, however, refusing to give up on Bucky. Nevertheless, Rogers is given no choice but to confront the Winter Soldier during a Hydra takedown. It's one of the most personal fights in the MCU, as Rogers eventually lays down his shield in order to reach his friend. Although he may deny his attachment to Steve, the Winter Soldier resists delivering the killing blow. Bucky finally wakes up when Steve plummets to what looks like a watery grave and a prosthetic arm reaches out to him.

“The Winter Soldier” possesses an overarching sense of dread that's best represented in this scene where Cap finds himself surrounded by Hydra spies in an elevator. Steve might be vastly outnumbered, but that doesn't mean Hydra has the upper hand. Before any punches are thrown or any threats are made, Rogers offers his enemies a chance to back out. Everyone unwisely declines his offer, resulting in a brilliantly choreographed brawl where Cap single-handedly takes down this fleet of sleeper agents. (xref) The scene has a clever callback in “Avengers: Endgame” when Rogers travels to 2012 and once again steps into an elevator slithering with spies. Steve is able to avoid a fight this time, however, by saying two words that had everyone in the audience cheering.

(xref) Falling on a dummy grenade, Steve Rogers demonstrated early on that he would gladly sacrifice himself to save others without giving it a second thought. Rogers' bravery is put to the ultimate test as Red Skull's plane targets New York. To prevent the terrorist attack, Rogers makes the virtuous decision to crash the aircraft in the ocean. Although they both know how this will likely end, Peggy Carter attempts to comfort Steve in what could be their final moments together, setting a new date for their night out. As Rogers is frozen for 70 years, it seems he's missed his window for a happy ending with Peggy. (xref) Thanks to time travel, though, Peggy is able to teach Steve how to dance at long last.

Dying for the greater good is one thing, but the “greater good” isn't always easy to identify. The tension that's divided the Avengers reaches its boiling point when Tony learns that Bucky killed his parents, albeit under mind control. The fact that Steve kept this from Tony only leaves him feeling more betrayed. To save one friend, Steve loses another in the process. While it might not be the most bombastic fight in the film, Captain America's duel against Iron Man is the most emotionally gripping. Once again asserting that he can do this all day, Cap bests Iron Man in battle. Regardless, there are no winners in “Civil War,” as Steve gives up the shield Tony's father made for him, no longer feeling worthy.
Before we get to our top pick, here are a few honorable mentions:

A few years after reaching his lowest point, Rogers proves that he's not only worthy of his shield, but also Thor's hammer. (xref) When Rogers managed to nudge Mjolnir in “Age of Ultron,” fans started to wonder if we might see him wield the hammer in battle. Everything comes together in “Endgame” as Thanos has Thor down for the count. Once Mjolnir begins to levitate, we're led to think that it's returning to the God of Thunder. Instead, Mjolnir gravitates towards Rogers, who uses the weapon to knock Thanos down a peg. Steve Rogers was chosen to be Captain America for a reason and this moment epitomizes why. Through his nobility, selflessness, and determination to do what's right, a star-spangled man possesses the power of Thor.
read more... 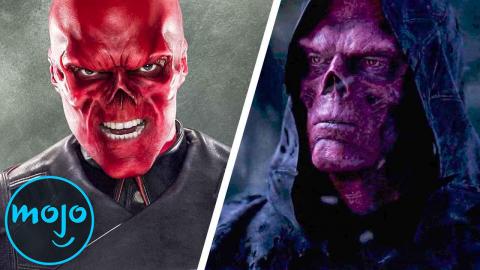 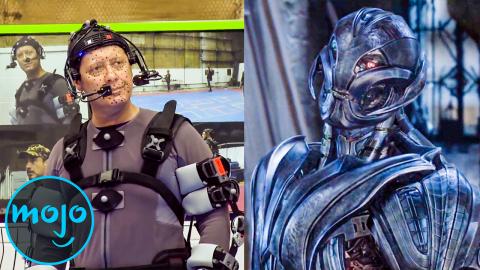 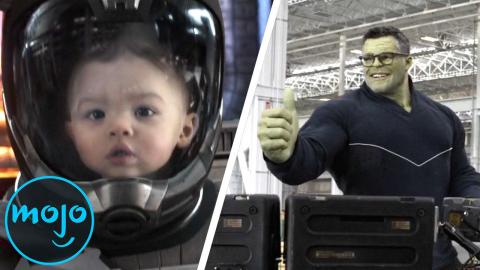 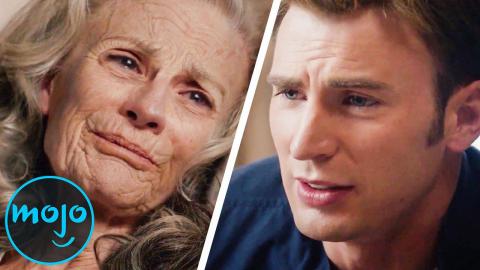 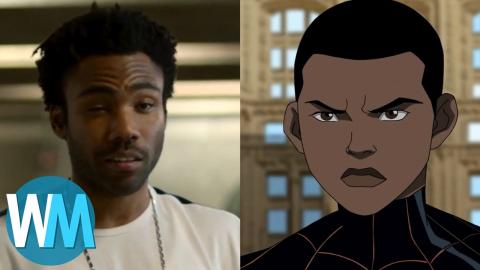 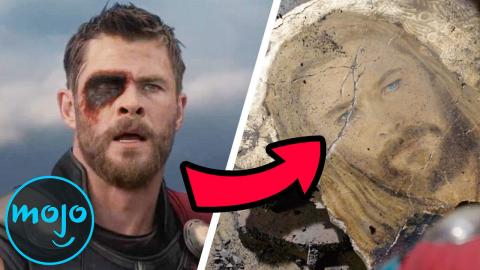 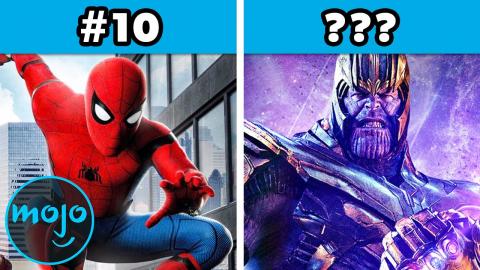 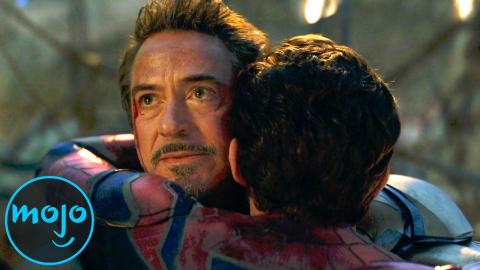