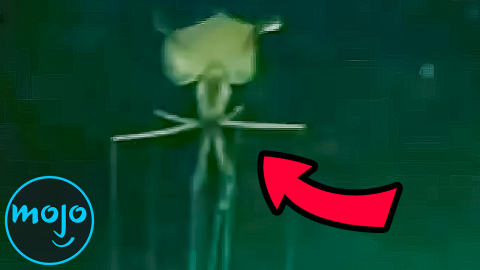 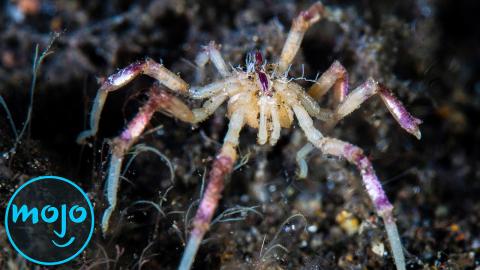 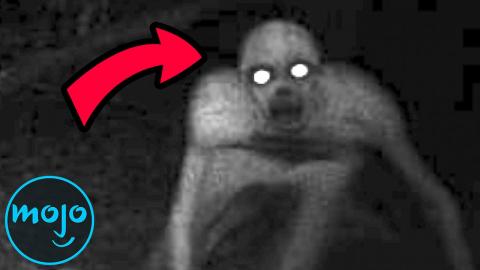 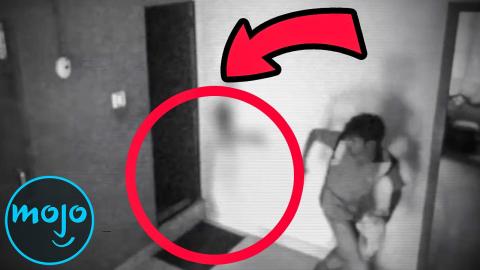 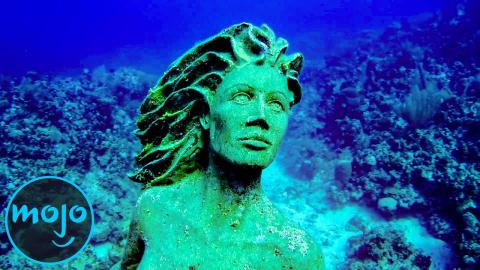 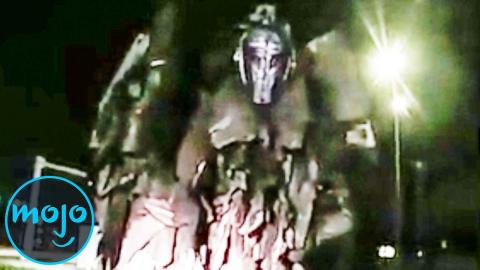 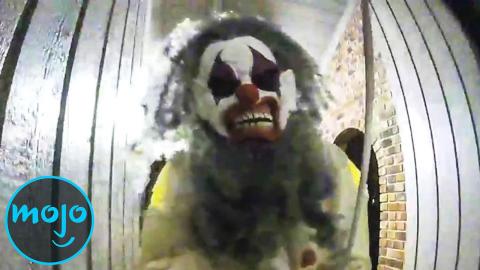 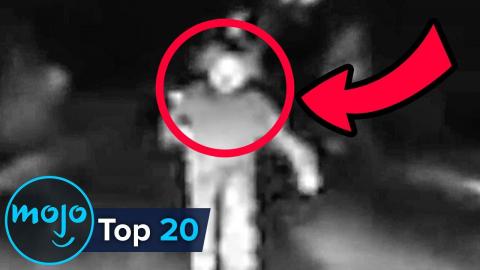 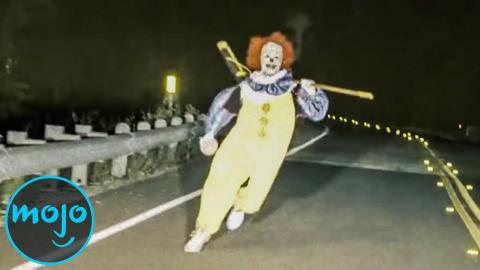 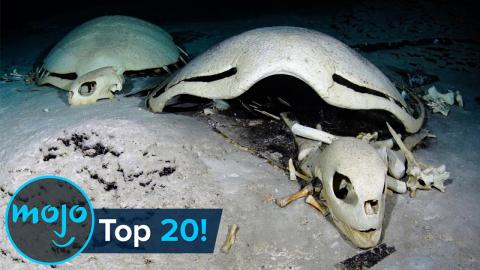 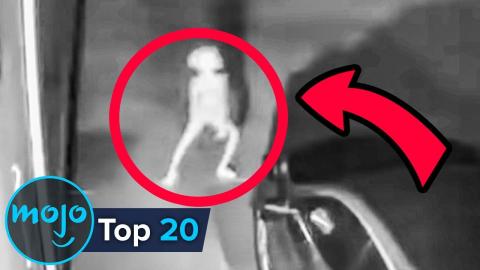 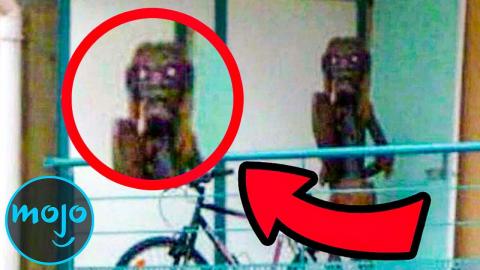 VOICE OVER: Peter DeGiglio
These underwater shots will freak you out! For this list, we'll be looking at the eeriest and most unsettling visuals that have been recorded in oceans and lakes. Our countdown includes Mystery Creature, Train Graveyard, A Human Skeleton, and more!
Transcript ∧


Welcome to WatchMojo, and today we’re counting down our picks for the Top 10 Creepiest Things Caught on Underwater Cameras

For this list, we’ll be looking at the eeriest and most unsettling visuals that have been recorded in oceans and lakes.

Which of these creeps you out the most? Let us know in the comments below!

The ocean really gets the imagination going, and it is home to some terrifying creatures. This footage, captured back in 2017 by an exploratory vehicle, shows the remains of a long-dead creature 2,700 feet down on the bottom of the Mediterranean Sea. The skeleton mostly consists of what looks like a giant spine. It’s alleged online that the spine was 98 feet long, although we can’t vouch for that. The identity of the creature is unknown, with some suggesting it’s a hammerhead shark, a whale, or an ancient, long extinct creature. Whatever it is, it creeps us out.

It’s amazing what types of creatures we find underwater. A prime example is the Barreleye, or spook fish - easily one of the weirdest fish out there. Its head is completely transparent, allowing you to see its tubular eyeballs. The idea of a see-through fish head seems like the stuff of science fiction, not of our own Earth, yet here it is. The transparent head helps with the Barreleye’s vision and allows it to see prey in the dark depths of the Atlantic, Pacific, and Indian oceans in which it dwells. Fascinating? Yes. The stuff of nightmares? You bet!

Turns out, the aliens aren’t just drawing in our corn fields - they’re hitting the bottom of our oceans, as well. First discovered off the coast of Japan in the mid ‘90s, these underwater crop circles consist of very elaborate designs. It’s a very creepy sight, conjuring images of lost underwater civilizations or some type of intelligent monster. But it’s not aliens, it’s not a lost civilization, and it’s not a monster. These circles are actually made by male pufferfish who are hoping to attract a lady pufferfish. Yes, they’re still creepy, but there’s a certain humor in discovering that these “crop circles” are actually just part of a fish mating ritual!

Spiders are scary enough - never mind underwater spiders! The last thing we want while scuba diving is having a creepy crawly scuttling across our masks. Sea spiders are horrifying little buggers found in various oceans around the world. While most are quite small, some deep water species have legs that measure over two feet long. And you thought tarantulas were nasty. Watching these spiders in action elicits a certain visceral reaction - especially the ones with long, spindly legs. We just can’t help but shudder in response.

It’s inherently creepy finding above-ground items buried deep underwater. It elicits a fear response, as we know that it’s not supposed to be there. Case in point - the underwater train graveyard of New Jersey. Found under 90 feet of water off the shore of Long Branch are two trains dating back to the 1850s. To make matters even creepier, there is no historical record of these trains having existed. Explorers believe that the trains were being transported across the Atlantic when they were lost in a nasty storm. They remained lost for well over a hundred years before they were discovered in 1985.

Back in the mid 2000s, archaeologists made a startling discovery in Lake Michigan’s Grand Traverse Bay. While searching for shipwrecks, the experts found some type of underwater stone structure that is likely of human origin. While the structure has been compared to Stonehenge, it’s not a circular formation like the iconic European landmark. Rather, it’s a long line of boulders, which Dr. John O’Shea of the University of Michigan believes was used for herding caribou in prehistoric times. One rock is of particular interest to archaeologists, as it contains what might be a carving of a mastodon. Whatever it is, it’s a little unsettling seeing a mile-long line of rocks under the water.

Sea monsters may not exist as they do in film and literature, but this will do just as well. This footage was taken by a remotely operated video camera at a deep sea oil rig off the coast of Britain and depicts what can only be described as an enormous blob of flesh. Suffice to say, this is the stuff of nightmares. Heck, even fictional sea monsters aren’t as scary as this! After the footage made its rounds through the internet and creeped a lot of people out, it was identified a massive jellyfish called deepstaria reticulum. We don’t care what it’s called, we don’t want any part of it.

Finding a human skeleton at the bottom of the ocean has to be up there in terms of nightmarish scenarios. Discovered back in 1900, the Antikythera shipwreck provided some astounding archaeological material, including the famous Antikythera mechanism, which is considered the world’s oldest analogue computer. Researchers were at the site in 2016 when they found a human skeleton. Various body parts are easily distinguished amongst the bones, including the man’s jaw, legs, and ribs. Experts believe that he went down with the ship, and they hope that DNA testing on the bones will shed further light on the historic shipwreck.

When it comes to scary sea monsters, absolutely nothing beats the bigfin squid. In 2007, the Shell Oil company captured an amazing bit of footage in the Gulf of Mexico. Shot by a remotely operated underwater vehicle, the footage depicts a stationary creature with long, thin tentacles dangling from its body. It looks like some type of Lovecraftian monster, and the horrifying video quickly went viral. It’s easy to see why. The dark setting, the long tentacles, and the creepy way the animal just sits there all combines to create an unforgettable image. This creature is the rarely-seen bigfin squid, whose tentacles can measure up to 26 feet long. That’s a big no thanks from us.

Perhaps the scariest thing we’ve found out on the open ocean are patches of garbage floating on the surface like a film of oil, or sinking to the bottom to remain there for thousands of years. Countless videos and photographs have captured the garbage that litters the world’s waterways, seemingly from some dystopian future - actually our present. It’s believed that by 2050, there could be more plastic than fish in the sea by weight. Of course, there’s also a lot of microplastics that are invisible to the eye. The Great Pacific garbage patch alone covers an estimated 620 thousand square miles and consists of 50–142 tons of plastic. That’s pretty terrifying when you think about it.
Comments ∧