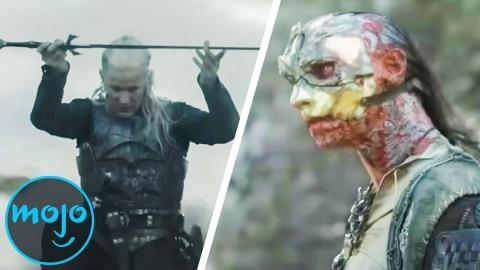 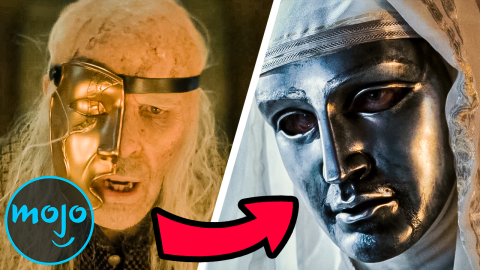 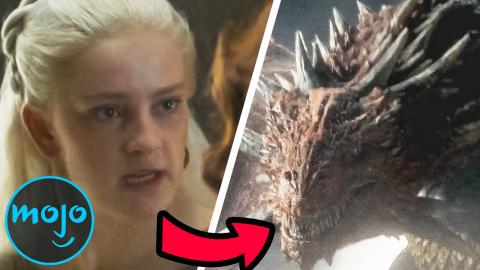 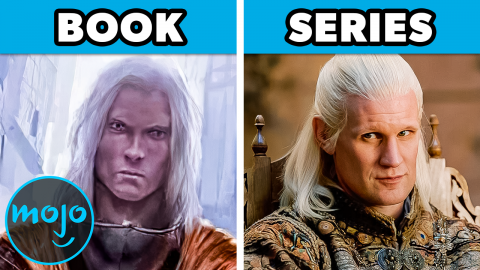 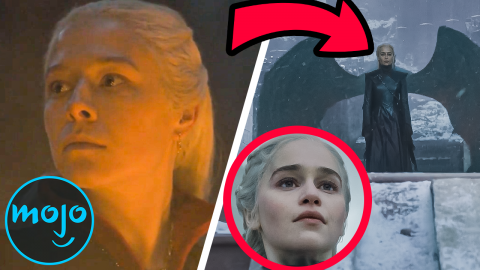 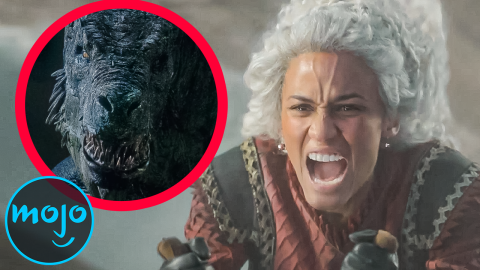 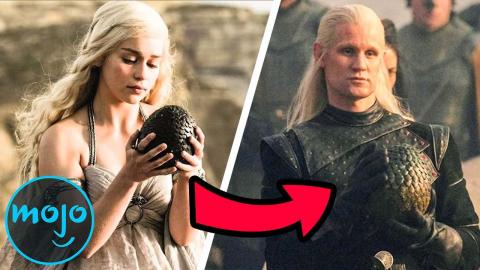 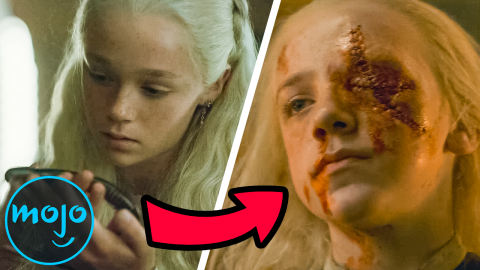 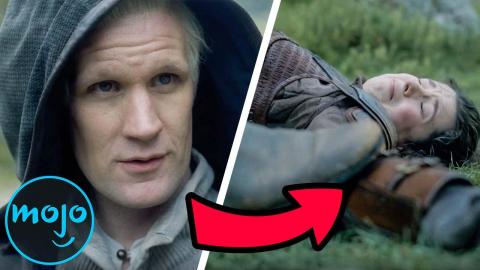 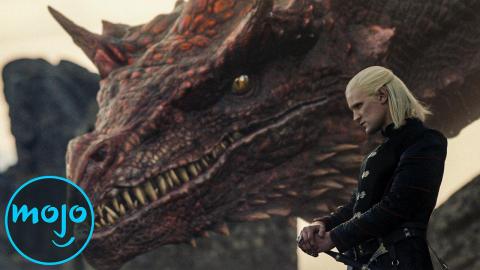 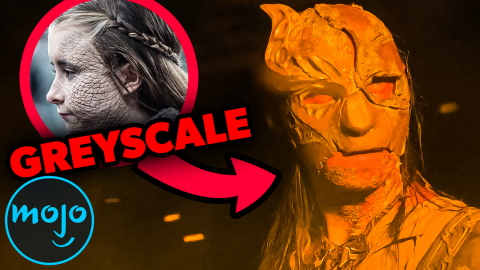 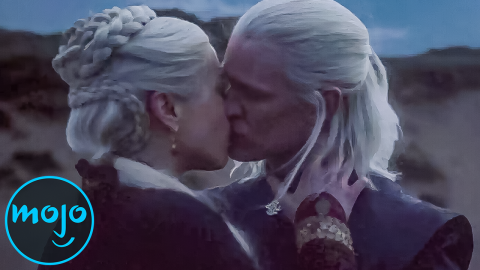 Top 10 Upsetting Moments from House of the Dragon 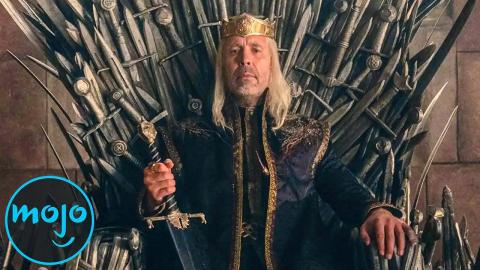 The Origins Of House Targaryen

VOICE OVER: Rebecca Brayton
Much like "Game of Thrones," the first season of "House of the Dragon" had plenty of shocking twists. For this list, we're looking at shocking plot developments that changed the course of the show in its first season. If you haven't seen all of Season 1 yet, beware of major spoilers. Our countdown includes Laenor's Faked Death, Larys Ends the Strongs, Aemond Can't Control Vhagar, and more!
Transcript ∧

Welcome to WatchMojo, and today we’re counting down our picks for the Top 10 “House of the Dragon” Twists. For this list, we’re looking at shocking plot developments that changed the course of the show in its first season. Of course, book readers may have seen some of these coming, but that doesn’t make them any less twisty. If you haven’t seen all of Season 1 yet, beware of major spoilers. Which of these twists shocked you the most? Let us know in the comments below!

“The Princess and the Queen”

Larys Strong slowly works his way into the show proper. Though by the time this episode comes around, we are fully aware of his menacing presence. Larys’s exact opposite, his brother Harwin has made a mess of things in King’s Landing by fathering Rhaenyra’s children and doing a poor job of keeping it a secret. Meanwhile, Alicent is regretful over her father Otto being dismissed as Hand of the King in favor of Larys and Harwin’s father Lyonel. This perks the ears of the duplicitous Larys, who arranges for his own father and brother to burn alive at Harrenhal to facilitate the return of the old Hand. When Alicent learns of these developments, she knows she’s unwittingly gained a dangerous ally.

“We Light the Way”

We don’t see Rhea Royce in the first four episodes, but we do hear a lot about her from her estranged husband Daemon, and not often in a flattering light. Finally, Episode 5 opens with her in the Vale, but the arrival of Daemon portends of some serious doom. But by the time the former realizes the danger, Daemon causes her horse to panic and crush her. We’d already taken to Rhea thanks to her no-nonsense attitude and dry wit, so it came as something of a blow when Daemon finished her off off-screen. This frees up Daemon to marry Rhaenyra, though their series-shifting union wouldn’t occur until years later.

Vhagar is often touted as the largest-known living dragon, and she definitely looks like it. So you gotta know that claiming her would be a major power play. Once again, Vhagar finds herself without a dragonrider in the wake of Laena’s death. Aemond, too often ridiculed by his younger family members for being weak, sees an opportunity to change his life forever. He boldly struts out to see Vhagar, tempering the raging fire within. He then rides her through the night, solidifying their bond. This is arguably the most seismic dragon development on the show, so much so that the admittedly shocking brawl that follows feels much less consequential. Aemond may lose an eye, but even he sees it as a major win.

“The Heirs of the Dragon”

We expected “House of the Dragon” to hit us hard out the gate. Yet not even we could’ve predicted how. The early scenes establish Queen Aemma as being well into her seventh pregnancy, with five of her previous ones ending in heartbreak. We came to like the queen, so we shuddered to think this time for her would be the same. It isn’t - it’s much, much worse. King Viserys is informed that the only way to save the baby would be to sacrifice Aemma. Despite his good moral character, Viserys lets them cut into his dutiful wife. Viserys losing his Queen was already a game-changer, but the loss of his newborn son and potential heir only made the tragedy that much more devastating.

We kinda figured Lucerys wouldn’t hear the end of him taking Aemond’s eye, and boy does he not in the season finale. Luke arrives at Storm’s End to curry favor from the Baratheons in the lead-up to the Dance of Dragons. However, he’s mortified to find Aemond already there and Vhagar parked outside. Aemond is clearly still salty over the whole eye debacle, but is prevented from evening the score inside the hall by Lord Boros. Luke does his best to escape atop his dragon Arrax, but Vhagar is too large for it to be a fair fight. Aemond taunts his nephew, but eventually neither can restrain their dragons from retaliating. Vhagar ends things herself by biting down fiercely on the dragon.

Being a king without a queen and a prospective male heir, Viserys is pressured into remarrying. By all accounts, Laena Velaryon is the “smart choice” that would further bolster House Targaryen, but it’s undeniably creepy seeing as she’s twelve years old. Viserys too isn’t thrilled about the match, and despite his best instincts, he is compelled to follow his heart instead. Otto Hightower has heretofore been planting his daughter Alicent into Viserys’s life, and it all pays off for him when Viserys announces his choice. It’s also pretty weird, seeing as Alicent is the same age as Viserys’s daughter Rhaenyra, but this choice undeniably has huge ramifications for the realm as Alicent becomes a major player in the game of thrones.

#4: Rhaenyra & Daemon’s…Whatever You Wanna Call It

“King of the Narrow Sea”

The first few episodes firmly establish the love-hate relationship between Rhaenyra and Daemon Targaryen, with the pendulum slightly favoring the former half of that dynamic. But Rhaenyra’s ostensible goodness and Daemon’s unrelenting brutality made it seem like they could never be on the same page. Well, never underestimate two Targaryens who have the hots for each other. After sneaking out of the Red Keep, Uncle Daemon takes Rhaenyra on a night out on the town, ending things in a brothel. You can see where this is going. The two don’t end up doing… you know, but they definitely do a few episodes later when Rhaenyra’s a grown adult. Yeah, it’s still weird. But it does mark their solidified union leading up to the Dance of Dragons.

“Second of His Name”

“Game of Thrones” gave us a plethora of exciting battles and extended conflicts, so we were looking forward to seeing the war in the Stepstones play out over the course of the season, or at least a few episodes. Not so fast. In show time, Daemon has been leading a grueling campaign for multiple years, but we’re only treated to a couple of setpieces before he decides to end things himself. Despite struggling heretofore, the promise of reinforcements from Viserys is all the motivation Daemon needs to take action. He feigns surrender, only to bust out and turn the tide of the conflict single handedly. We don’t get to see it, but he decimates the Crabfeeder, a villain we were expecting to get familiar with.

This plot twist is so good, it even caught book readers by surprise. Laenor has since grown useless in a for-show marriage that goes against his sexuality. To make matters worse, not even his children are biologically his. Despite there not being passion in their relationship, Rhaenyra and Laenor have come to care for each other. However, Rhaenyra and Daemon realize they need to be together, meaning Laenor has to die. We mourn for Laenor as it seems his lover Qarl has been hired to kill him. So imagine our jubilation when it’s revealed that Laenor’s death was staged so he and Qarl could run away together. It’s a brilliant twist, and we cannot wait to see what’s next for Laenor.

“The Heirs of the Dragon”

With “House of the Dragon” set about 200 years before the events of “Game of Thrones,” it wasn’t exactly clear how the two shows would connect with each other, if at all. Well, leave it to the premiere episode of the former to spell it out in no uncertain terms. By all accounts, the “Song of Ice and Fire” detailing the struggle between the living and the dead is the epic crescendo of “Thrones.” So to learn that Viserys is well aware of the threat and how to potentially prevent it is huge news. As he names Rhaenyra his heir, Viserys imparts this knowledge onto her for her to pass down, ensuring the Dance of the Dragons is inherently tied with what’s to come.
Comments ∧