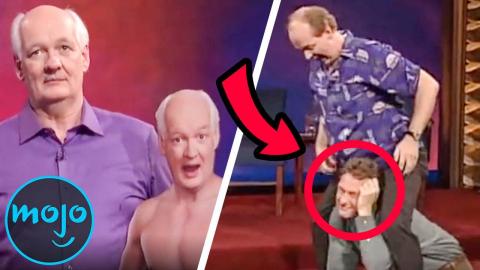 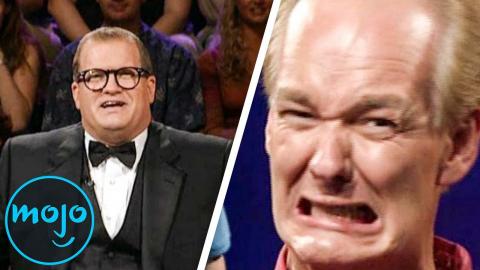 Top 10 Funniest Whose Line Is It Anyway Moments 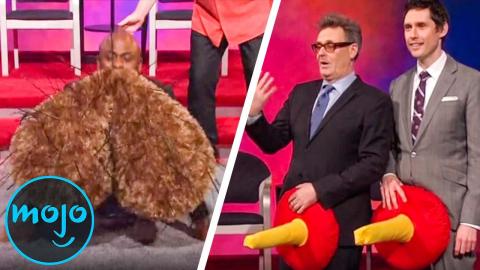 Top 10 Funniest Props In Whose Line is it Anyway 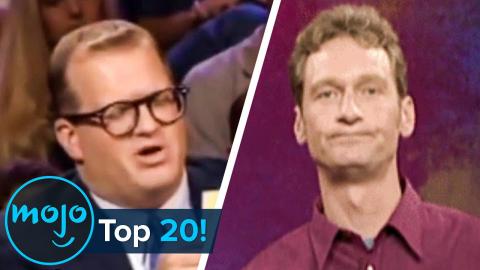 Top 20 Whose Line is It Anyway Scenes From a Hat 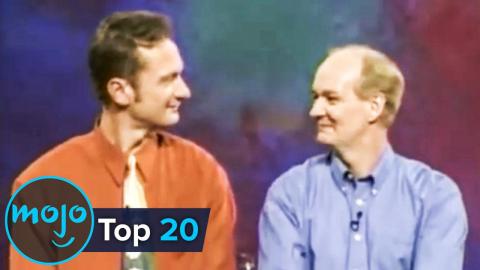 Top 20 Times Whose Line Is It Anyway Bits Went Wrong 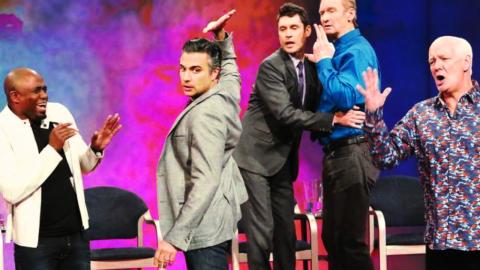 Top 10 Whose Line Is It Anyway Games 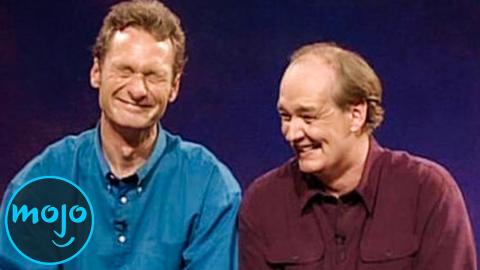 Top 10 Times Whose Line Is It Anyway Bits Went Wrong 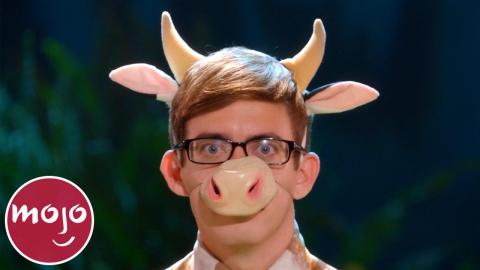 Top 10 Unscripted Glee Moments That Were Kept in the Show 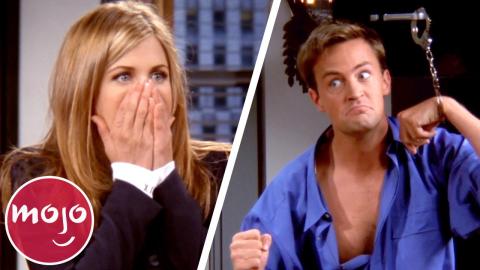 Top 10 Unscripted Friends Moments That Were Kept in the Show 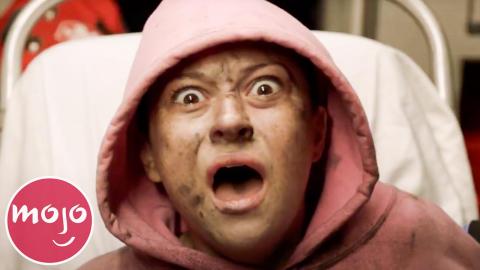 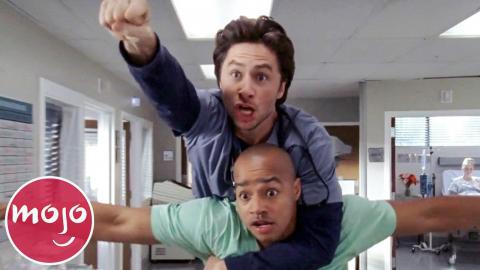 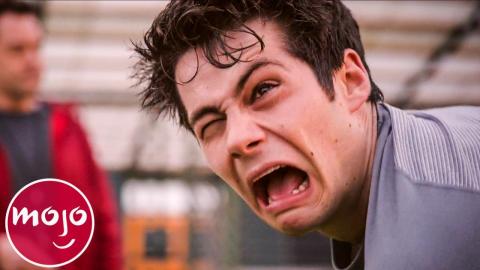 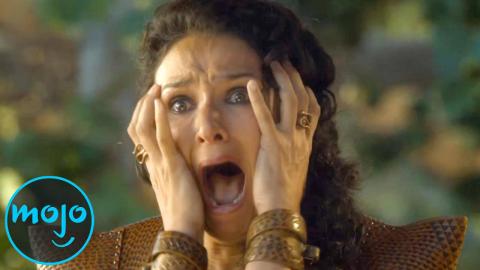 VOICE OVER: Rebecca Brayton WRITTEN BY: Tori Serpico
Improvised comedy is sometimes the best kind! For this list, we'll be looking at the funniest scenes performed by “Whose Line”'s most iconic duo! Our countdown includes scenes featuring a diet aid, Tarzan and Jane, a foal being born and more!
Transcript ∧

Welcome to WatchMojo, and today we’re counting down our picks for the Top 10 Colin and Ryan Moments from Whose Line Is It Anyway. For this list, we’ll be looking at the funniest scenes performed by “Whose Line”’s most iconic duo! If you could suggest any improv scene for Colin Mochrie and Ryan Stiles, what would you want to see them act out? Let us know in the comments!


This moment combines everything that makes a Colin and Ryan scene great: a fake product to sell, witty banter, and wacky props! This game of Infomercial required the duo to pull items from under their table at random to use as part of their fictional diet aid advertisement. And it’s bound to be hilarious from the start, when off the bat Ryan calls Colin actor Craig T. Nelson. The two share the spotlight and the laughs equally in this clip, never trying to upstage one another with any of their jokes!


It’s always fun when the “Whose Line” crew gets some audience members involved! Especially when the participants have a little bit of trouble getting the rules down. Since Colin and Ryan are such seasoned pros, they know how to use mistakes to their advantage in a performance. They effortlessly embrace the fact that the two ladies designated to do their sound effects are a smidge awkward, and it actually makes the scene even funnier! Plus, you know something is hilarious when Drew laughs so hard that has to take his glasses off!


It wouldn’t be Colin and Ryan’s greatest hits without their signature game– Greatest Hits! These two are totally in their element when they are introducing their fake CD collections for Wayne and guest to perform. This particular made-up compilation– “Songs of Horror” – is stacked with funny moments start to finish. They couldn’t help but mock Drew’s over pronunciation of the word horror throughout the whole scene. But the number one burn in this clip comes from Colin, who uses Ryan’s corny transition technique right back at him. We love how the two of them playfully jab at each other, while building on each other's bits!


What a cute couple they make! In another round of the game Sound Effects, our dynamic duo gets an eager set of audience volunteers to bring their scene to the next level. The spot-on noises the two members make combined with the way that Colin and Ryan get into character makes this so fun to watch. You can even see Wayne losing it in his seat behind them! The performance is ended by an unexpected fart noise from one of the women. Don’t act so mature– farts are funny!


Over ten seasons performing together on “Whose Line Is It Anyway?,” and these two still manage to find new ways to crack each other up! In this game, either Colin or Ryan are meant to discover a secret hidden prop in the midst of the scene. And when Colin finally does, he can’t contain his laughter! Seeing him break character is such a rare occurrence on the show, and of course the thing that put him over the edge was a cutout of himself! Once they had this prop in the mix, it did all of the talking for them!


This game has only been played once in the history of “Whose Line Is It Anyway” – maybe because Colin and Ryan aced it on their first try! Their prompt is that Ryan is fitting Colin for a suit and they both keep getting offended, which triggers the title line. This scene puts their comedic talents on display as it uses such a simple concept to build tons of jokes. While they’re great with set pieces and complicated rules, it’s nice to watch these improv masters play off of each other in a natural way.


It’s so impressive when it seems as if Colin and Ryan are reading each other's minds… but it’s funnier when they totally miss the point! Ryan tries to prompt Colin to announce the next band as “The Who,” and it goes way over Colin’s head. In Colin’s defense, his question was a little vague! But what comes from this misunderstanding makes for a classic moment between the duo! Colin’s impression of an arctic tern saying “Backstreet Boys” is so bizarre and unexpected that Ryan needs a beat to laugh it out.


Never forget your roots– this moment comes from the very first episode aired of “Whose Line Is It Anyway?”! The game Party Quirks requires each cast member to enter the scene as a type of character or with a specific objective for the “host” of the party to guess. Ryan dives right in– literally– into his prompt, and pretends that Colin is giving birth to him. And of course, Colin plays right along with it! This scene goes to show that these two don’t even need words to bring the house down– they are masters of physical comedy as well!


No one commits to the bit quite like Colin Mochrie! As they introduce another batch of songs during Greatest Hits, Colin and Ryan once again manage to catch each other off guard. Ryan has the word “Cuba” in mind for Wayne’s next performance, but instead Colin confidently declares the word “tapioca!” Between the two of them, any absurd diversion– no matter how silly it is– can still fuel a great scene. Even if they have to giggle through it! And who couldn’t listen to Colin sing out “tapioca” all day long?


Improv comedians by day, secret agents by night! Or, why not both at the same time? This game of Improbable Mission requires Colin and Ryan to take on a super special task, as given by the audience. This mission? The laundry! They do such a great job of adding humorous new layers to an already funny concept during the scene, namely Colin’s obsession with the “cat.” The duo is also able to flex their top tier object work here, building out a whole world in such a short performance. We’d say the real “mission: improbable” would be to try and watch this without cracking up!
Comments ∧