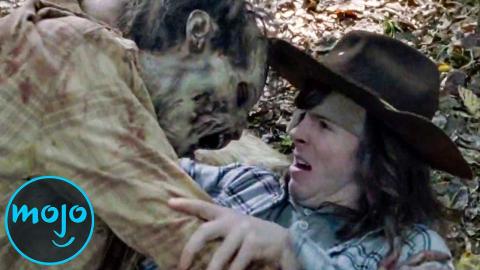 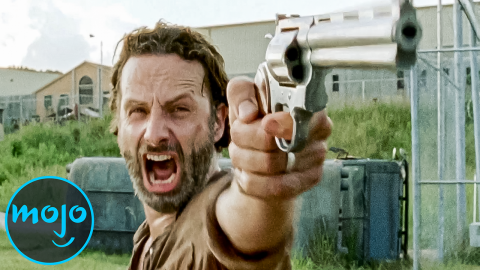 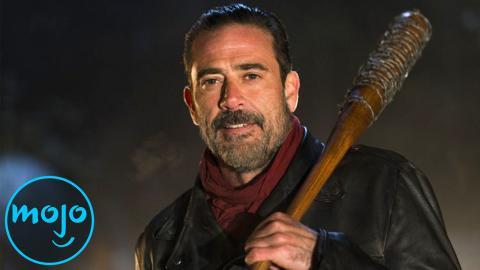 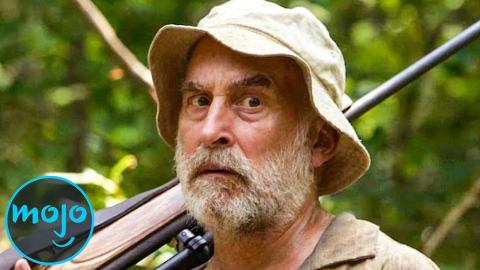 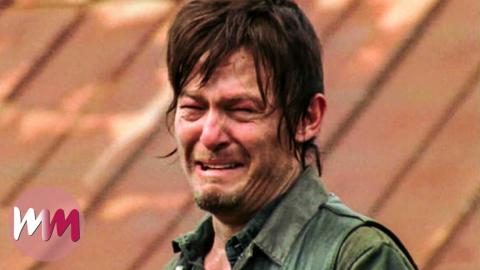 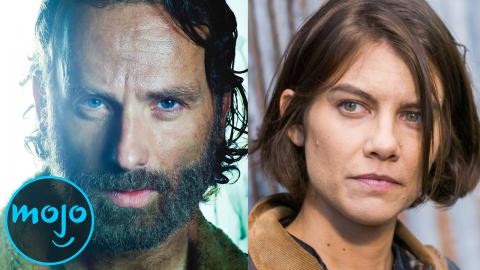 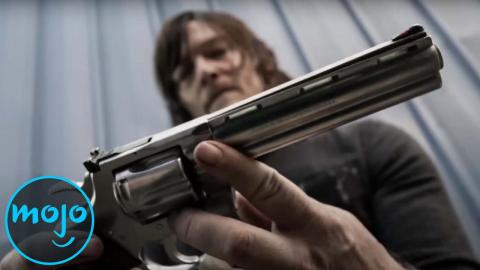 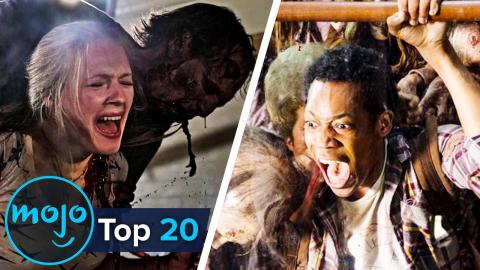 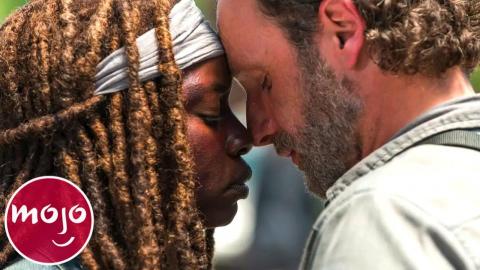 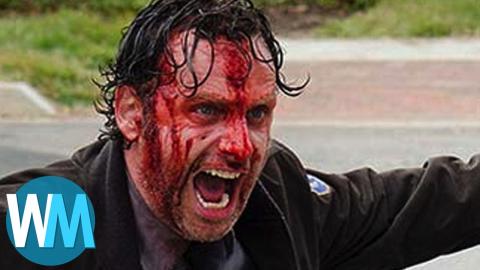 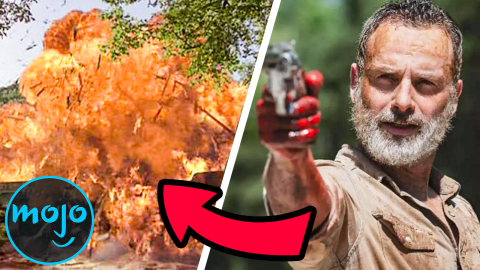 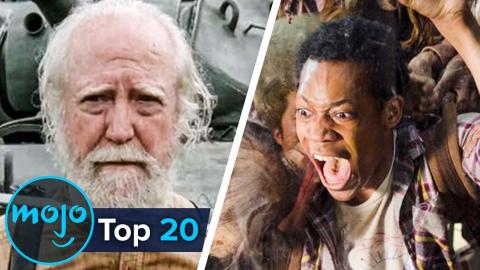 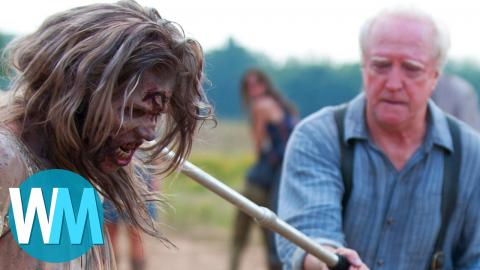 VOICE OVER: Andrew Tejada WRITTEN BY: Zachary Siechen
Brains are not just for food during the zombie apocalypse! For this list, we'll be looking at those unfortunate moments when characters in “The Walking Dead” didn't seem to have enough brains to fill a zombie's belly. And beware of major spoilers ahead. Our countdown includes poor choices made by Carl, Eugene, Beth and more!
Transcript ∧

Welcome to WatchMojo, and today we’re counting down our picks for the Top 10 Dumbest Mistakes on The Walking Dead. For this list, we’ll be looking at those unfortunate moments when characters in “The Walking Dead” didn’t seem to have enough brains to fill a zombie’s belly. We’re not counting the spinoffs today because they could each have lists of their own. And beware of major spoilers ahead. What was the most idiotic choice a characters’ made on this show? Let us know in the comments below. But please, don’t go all “Negan” on us about it.

#10: Carl Messes With a Muddy Walker

While Carl Grimes eventually becomes a professional walker slayer, he starts out as a disobedient little kid who mistakes stupidity for bravery. Back in the Season 2 days at Hershel’s farm, Carl comes across a walker that’s trapped in mud. His bright idea is to shakily aim a pistol towards the creature…at point blank range and without provocation. Unsurprisingly, it lunges forward and nearly turns the boy into zombie-food. Besides needlessly endangering himself, Carl inadvertently leads the monster back to the farm, where it sinks its teeth into Dale. The group was soon forced to put down one of their most fiercely loyal friends. None of this would’ve happened if Carl didn’t look a trapped walker in the mouth.

While Lori has made a number of questionable decisions, her vehicle mishap might be her worst mistake. After Rick fails to return from a venture into town, Lori insists on leaving Hershel’s farm to look for him. She also makes sure to tell no one where she is going. To top it all off, Lori drives distracted while reading a map, collides with a walker and proceeds to wreck her car on the roadside. Her entire outing makes everything worse. Lori’s actions cause some group members to argue and requires Shane to risk his life to find her. If she had literally just sat and waited, Rick would’ve returned without incident and the heroes wouldn’t have lost yet another car.

Once upon a time, Eugene was seen as a brilliant scientist who might hold the cure to stopping walkers for good. But it was eventually revealed that he was bluffing the entire time to convince people to protect him. That poker face would’ve definitely been useful when he came face to face with Governor Milton’s spoiled son Sebastian. After Eugene foolishly loses his cool and hits the privileged boy, the not scientist ends up in jail. He’s told the only way for him and his friends to stay safe in the governor’s community is to reveal Alexandria’s whereabouts. The cornered Eugene quickly spills the beans and exposes his home’s location. Thanks to Eugene’s lack of restraint, Alexandria gained more enemies they had to deal with.

It was practically a given that Henry would do something dumb if he was featured in an episode. Ultimately, it was Henry’s lack of self control around his love interest Lydia that proved that he wasn’t the most forward-thinking survivor. He initially tries to help her avoid being sent back to her mother during a tense hostage trade. When that very flawed plan fails, Henry decides to follow the entire group of Whisperers solo. He is unsurprisingly captured quickly and nearly slain by his very own love interest. Although Henry manages to slither his way out of that situation, his actions put a huge target on his back. It was little surprise that the Whisperers chose him as one of their victims later on.

#6: Rick Gets Betrayed By the Scavengers…Again

Clearly, Rick Grimes never heard the second part of the “Fool me once” idiom. In Season 7, he finds himself cornered by The Scavengers. However, Rick still pushes to make an alliance with their trashy group leader Jadis to fight Negan. But the Scavengers turn on the heroes and nearly cause them to lose the war before it begins. Despite that fact, Rick got to the Garbage People again and asked them to help bring down Negan’s army. The Scavengers end up nearly executing him before he ekes out another deal. When Rick marches on Negan’s base with his new allies, the trash army almost immediately abandons him when the going gets tough. Rick’s decision-making skills were just rubbish when it came to the Scavengers.

#5: Keeping A Barn Full of Zombies

When Glenn tries to get some private time with Maggie in a barn, he discovers that her family keeps a collection of walkers in that building. It turns out that the Greenes hold out hope that the undead may one day be restored to their human state. Despite their sympathetic motivations, the decision to keep so many walkers is absurdly dumb. They’re essentially keeping a deadly powder-keg only a stone’s throw away from where actual living people sleep. To add insult to injury, it’s revealed that the missing Sophia was in that barn the entire time. The group could’ve avoided a lot of dangerous search attempts if they just knew what was behind those doors.

#4: Trapping Themselves in a Cave

Some people never learn to mind their surroundings. While a small group of heroes is searching for the Whisperer’s horde of walkers, Carol recklessly runs after her nemesis Alpha. The chase soon leads into an unknown cave. Instead of waiting to see what happens, Daryl insists that every one of her allies rushes in after her. Like cattle herded into a pen, all our heroes end up trapped underground with seemingly no way out. While Carol barreling into a foreign confined space would’ve been bad enough, seeing everyone else fall in line like lemmings was excruciating. Their desperate escape eventually led to Connie being separated from the group for a long time. When Carol insisted their misfortunes should be blamed on her, we immediately agreed.

The road to saving Beth from the clutches of Dawn and the Grady Memorial Hospital was a long and tumultuous one. However, it looked like the journey would have a happy ending when her friends agreed to hand over prisoners to secure her safety. But everything goes sideways when Dawn insists that Rick hand over the innocent Noah. Although the boy selflessly agrees, Beth won’t have it. She tries to lash out at Dawn with a pair of scissors. However, this action results in Beth getting shot and dying in an instant. If the heroine had just had better aim, she would have escaped. Beth’s failed attack stung more when Noah died later in the season. His loss made her heartbreaking death feel completely pointless.


“The Day Will Come When You Won’t Be”

Was it the man with the club who killed Glenn, or was it the actions of others? The long awaited appearance of Negan came with a finale cliffhanger that let us know one of the heroes was a goner. After a long wait, it was revealed that Abraham took the brunt of Lucille…but it didn’t stop there. Negan made it very clear that defiance would not be tolerated. But in the wake of the survivor’s death, Daryl loses his cool and punches the big bad. And with an ominous, “back to it,” Negan slayed Glenn. The crossbow survivor knew he was outmatched and outgunned. But Daryl still went in for a futile punch that came at the expense of a friend’s life.

Before we unveil our top pick, here are a few dishonorable…or should we say, dismemberable mentions.


Why Did She Have to Take the Safety Off When Aiming at a Friend?

Gage Steals Supplies & Breaks Off From the Main Subway Group

What Horrible Train of Thought Made Him Think This Was a Good Idea?

“The King, the Widow, and Rick”

We had to begin and end with Carl since his final mistake completely changed the trajectory of the show. While heading back to Alexandria, Carl comes across a stranger named Siddiq. The new character is slaying walkers to honor the mother that he’d lost. Carl can’t seem to resist unwarranted undead mayhem, so he and Siddiq go out of their way to attack a handful of them. Siddiq even utters the words, “you don’t have to do this.” During this unnecessary encounter, Carl gets the bite that eventually leads to his demise. This turn was especially baffling since the kid survives to the end in the source material. But adaptation or not, seeing Carl perish after making an easily avoidable mistake was painful.
Comments ∧