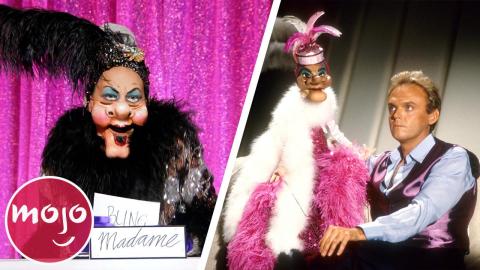 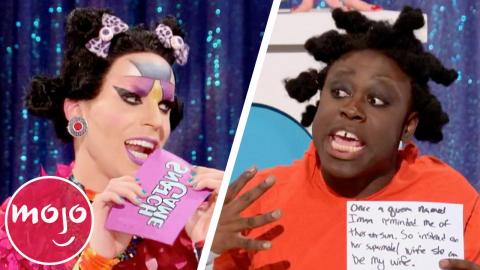 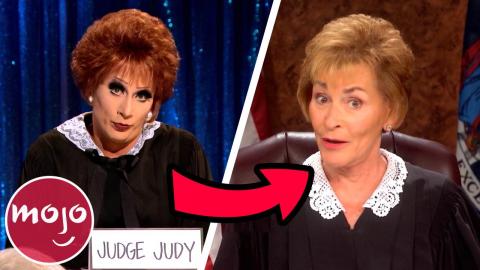 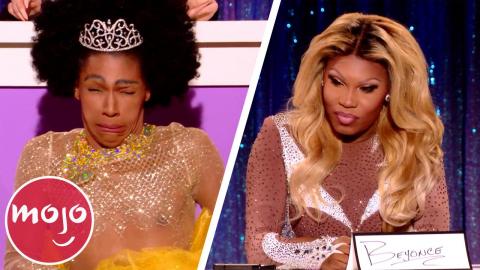 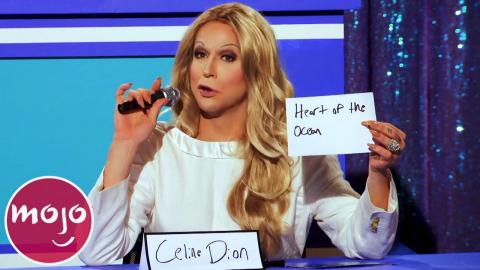 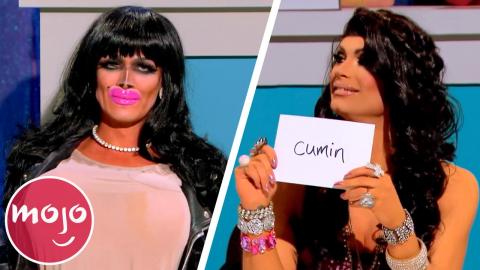 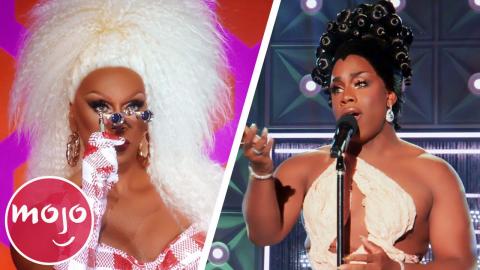 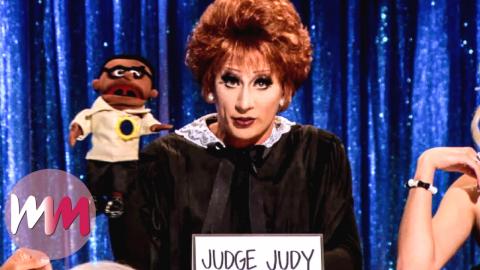 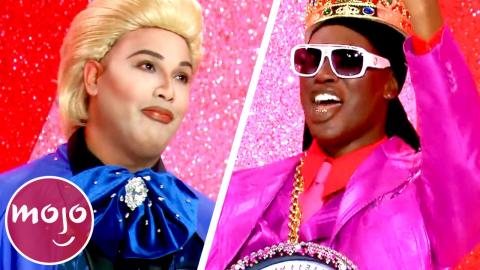 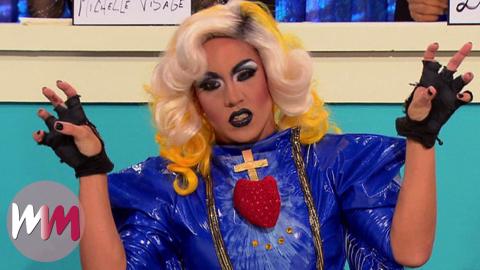 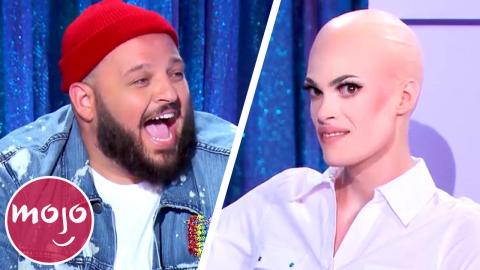 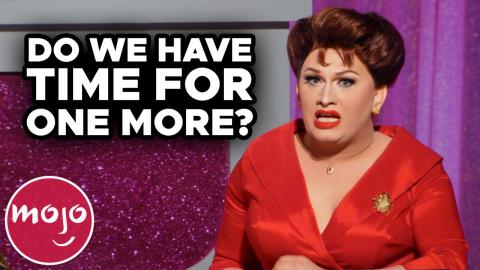 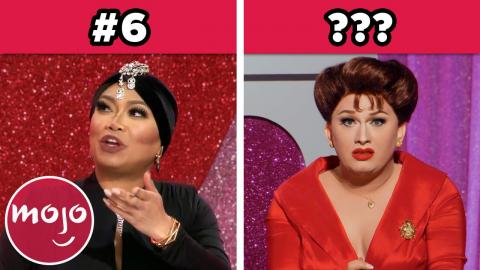 Ranking ALL the Snatch Games on RuPaul's Drag Race & All Stars

VOICE OVER: Rebecca Brayton
The Snatch Game impressions are the real deal. For this list, we'll be looking at not only how accurate each queen's impersonation is, but also how much work was put into performances of lesser-known celebrities to introduce them to a wider audience. Our countdown includes Yvie Oddly as Rico Nasty, Raja as Diana Vreeland, Raja as Madame, and more!
Transcript ∧

Each Snatch Game Comparing the Queens Impressions with the Real People


Welcome to MsMojo, and today we’re comparing the Snatch Game impressions in All Stars 7 with their real life counterparts.

For this list, we’ll be looking at not only how accurate each queen’s impersonation is, but also how much work was put into performances of lesser-known celebrities to introduce them to a wider audience.

Did these queens absolutely nail it? Sound off in the comments below.

#10: Trinity the Tuck as Leslie Jordan


Trinity’s impression of Leslie Jordan drew on the longtime character actor’s trademarks, poking light fun at his height (or lack thereof), his flamboyance, and his Southern drawl. Many viewers may know Jordan from his scene-stealing in everything from “Will & Grace” to “The Help.” Most of Trinity’s pretty accurate impression seems to be inspired by Jordan’s social media presence. His quarantine-themed videos were one of the highlights of the early COVID-19 pandemic, going viral for achieving that perfect mix of sweet Southern grandfather and lovable potty mouth. Although the wig and makeup are only suggesting the real Leslie Jordan, we’d have to say Trinity nailed the accent and the star’s playful sense of humor.

#9: The Vivienne as Catherine Tate (as Nan)


When “Drag Race UK” winner The Vivienne decided to do Catherine Tate for the All Winners Snatch Game, she opted to perform as one of the British comedienne’s iconic characters. As Joanie “Nan” Taylor, a character from “The Catherine Tate Show,” The Vivienne delivers on two of RuPaul’s favorite things: vulgar jokes and an accent she can’t understand. Watching the star’s old sketches, what really stands out is The Vivienne’s more lighthearted take on the irascible granny. Still, it’s impressive to see how she incorporated even the smallest details into her recreation of the character. Her well-used hankie, impressive age makeup, and her shabby shawl really clue us into her eye for detail.


The other queens didn’t know a lot about Elsa Majimbo when Shea revealed her as her Snatch Game choice. But the All Stars 5 winner was undeterred. The viral Kenyan comedian’s very distinctive physical punchlines, like eating potato chips and giggling ironically, made her the right choice for Shea. More than that, the queen also pays close attention to Majimbo’s distinctive delivery of jokes during her impression. This performance doesn’t get the same amount of love as some other ones this season. Yet we can’t help but appreciate that it’s actually a fairly accurate recreation of a beloved social media sensation.


Both are known for their big personalities and eccentric fashions, so Yvie Oddly and Rico Nasty really are a match made in Snatch Game heaven. Mimicking the rapper’s distinctive look, Yvie seems to have based most of her impersonation on Rico’s performance style rather than her real-life persona. The queen definitely has the attitude and unwavering confidence down. If this was all you knew of the rapper and songwriter beforehand, you might be fairly surprised by her relatively low-key personality in interviews. That’s probably the most surprising and interesting thing about this distinct impression!

#6: The Vivienne as Joanna Lumley (as Patsy Stone)


Taking on another British TV icon, The Vivienne channeled actress and model Joanna Lumley’s most famous role. The chain-smoking, narcissistic fashionista Patsy Stone from “Absolutely Fabulous” is already so exaggerated she’s practically a drag queen herself. Although this Patsy is much less… cruel than the one on “Ab Fab,” The Vivienne’s stunning physical similarity to the character really sells it. She also makes use of Patsy’s famous turn of phrase and her obsessive love of high-end fashion brands in her intro alone. All The Vivienne really has to do other than that is smoke her fake cigarette and drink wine straight from the bottle!


Snatch Game is best done using a character who has a lot of distinctive qualities. Well, few real-life figures were as distinctive as the legendary former editor of “Vogue.” As a student of fashion, season 3 winner Raja clearly feels a kinship with Vreeland that shines through her brilliant makeup job and eccentric take on the character. As a great Snatch Game impression should, Raja’s performance uses real-life components of Vreeland’s personality, like her crisp elocution, exacting speech, and rolled “r” sounds. But she exaggerates them for comedic effect. Vreeland’s ability to speak passionately about mundane things is another great detail Raja adds to her characterization.

She’s a la-a-ady. Reviving Lawrence’s character from his ‘90s sitcom, Monét demonstrates how good she is at riffing on a character. And she calls back to one of the decade’s most underrated sitcoms in the process. Donning some truly fabulous hair and long nails, Lawrence dragged up as the character of Sheneneh Jenkins throughout “Martin”’s five season run. Monét doesn’t just stop at the look. She’s also able to play up the character’s distinctive speech patterns. She even gets to show Sheneneh’s more flirtatious side in a great interaction with Yvie Oddly’s Boogieman.


The judges knew exactly who Lady Chablis was. But Jaida’s performance as the performer and transgender trailblazer is a great reintroduction to the unlucky among us who have forgotten. She rose to prominence after appearing in the 1997 thriller, “Midnight in the Garden of Good and Evil.” But The Lady Chablis was a fixture of Georgia nightlife long before then. Jaida uses a shimmering outfit, glamorous mug, and dangling earrings to bring the Lady to life. But the queen also brings her commanding presence to the set as well. Foul-mouthed and fabulous, Chablis was a luminous stage presence who voiced her opinions and didn’t care who heard. Jaida doesn’t get nearly the love she deserves for shedding more light on a pioneer.


Ventriloquist Wayland Flowers and his glamorous show puppet Madame were among the lesser known pop culture references featured in the “All Winners” Snatch Game. Raja’s animated performance is perhaps a little bit more profane than Wayland and Madame’s original act - but only a little. And the queen and her uncanny prosthetics resurrected the puppet, bringing her back from the brink of obscurity. Raja’s Madame is a fitting tribute to the bawdy old broad with a wicked sense of humor and a haughty cackle. Accurately impersonating another human is one thing, but an actual puppet? That’s some next level Snatch Gaming right there.


It’s fitting that “Drag Race”s queen of all queens should impersonate the diva of all divas. As a late-career Judy Garland, Jinkx Monsoon doesn’t just nail the iconic star’s look and voice. She nails the diction and the way Garland told a story. Jinkx also replicates the way the icon used to handle a microphone and even mirrors the grand gestures she would make when she sang. And not just that, the queen milks each one of these characteristics for maximum effect. That she manages to deliver the jokes while still staying true to the spirit of Garland herself proves she’s one of the best Snatch Gamers the show has seen.
Comments ∧