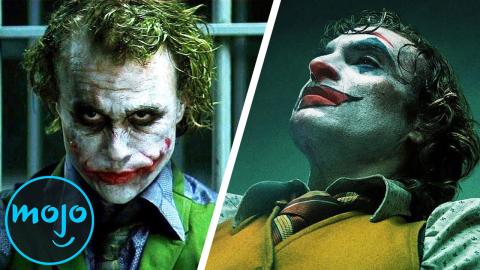 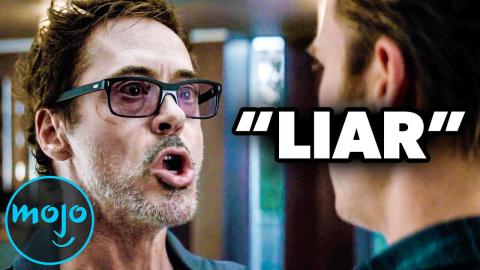 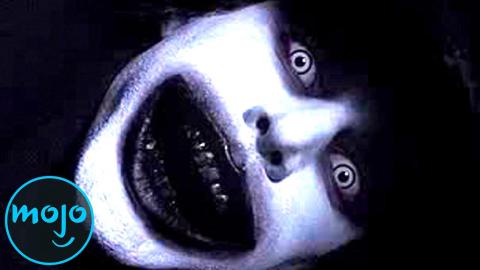 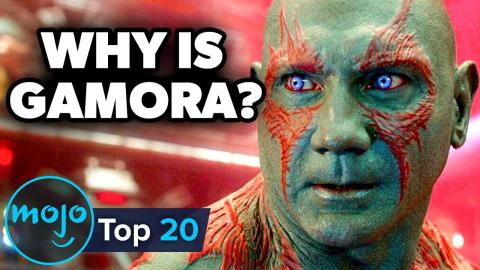 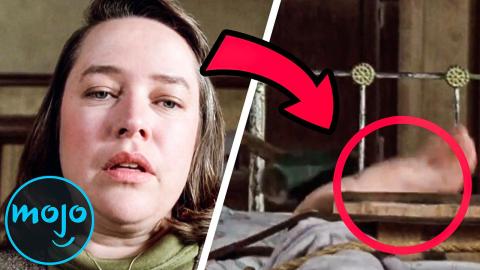 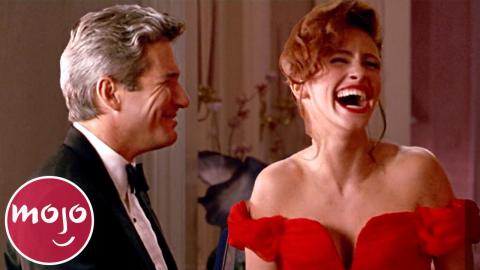 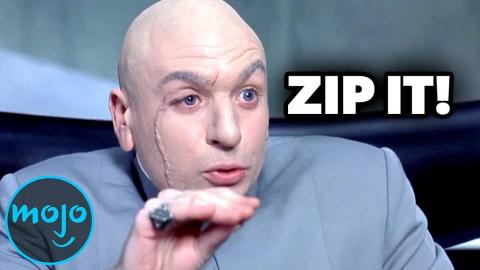 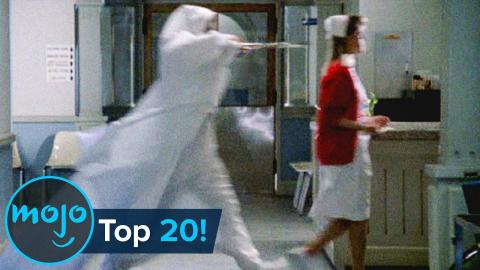 Top 20 Most Re-Watched Horror Movie Scenes of All Time 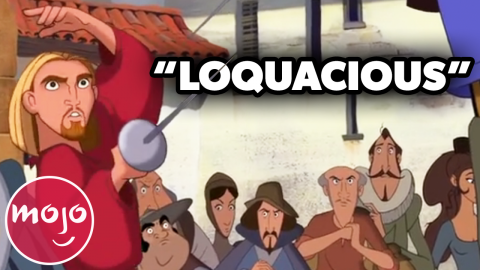 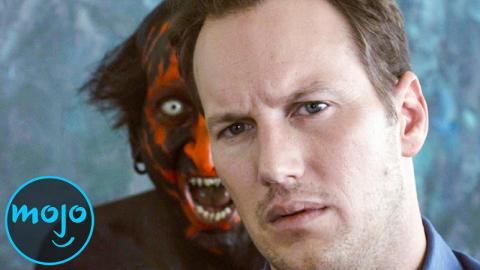 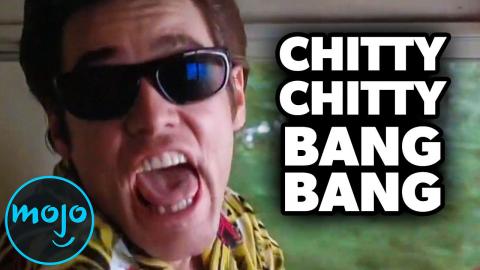 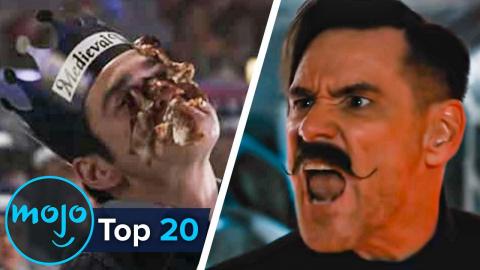 VOICE OVER: Phoebe de Jeu WRITTEN BY: George Pacheco
Well, that was surprising. For this list, we'll be ranking the classic, iconic or memorable moments from horror cinema that were performed off the cuff or otherwise not included in the original script. Our countdown includes "Shaun of the Dead", "The Shining", "Halloween", and more!
Transcript ∧


Welcome to WatchMojo, and today we're counting down our picks for the Top 10 Unscripted Moments in Horror Movies.

For this list, we'll be ranking the classic, iconic or memorable moments from horror cinema that were performed off the cuff or otherwise not included in the original script.

We're also putting a SPOILER ALERT into effect, since we'll be getting into some major plot points during the course of our list.

What are some of your favorite horror ad-libs? Let us know in the comments below!

"It Chapter Two" (2019)
Comedic moments in horror movies sometimes work really well, while other times they fall completely flat. Thankfully, the first entry on our list is courtesy of "Saturday Night Live" alum Bill Hader, who delivers a hilarious unscripted reaction to a...not very scary little dog. The sequence occurs when Hader and co-star James Ransone are looking at three devilishly trapped doors from Pennywise the Clown. First, the scary jump happens, and the actor responds according to the script, then a cute little Pomeranian appears-a callback to a joke Hader's Richie Tozier made earlier in the film-and the jokes start to fly. The actors' reactions to the dog were improvised, so as to make the humor feel authentic, and we think it totally works.

"Shaun of the Dead" (2004)
A little improv. worked wonders in "It," but a LOT of it was positively hilarious in this scene at the Winchester Pub from Edgar Wright's "Shaun of the Dead." The titular Shaun has just been dumped by his girlfriend, so his best mate Ed is doing his best to cheer him up. The improv-a-thon occurs when Ed, played by Nick Frost, rattles off back stories for all of the assorted characters in the bar. The reactions from Simon Pegg as Shaun are genuine, as Wright allowed Frost to work off the cuff for this stretch of dialogue. This loosening of the script helped this early scene in the film not only deliver the laughs, but also assisted in fleshing out the cast.

"Scream" (1996)
Matthew Lillard isn't exactly known for his resume of horror movie roles, but one big one has to be his portrayal of Stu Macher in the first "Scream" film. Macher has a number of notable lines during "Scream's" critical third act, when it's revealed that both Macher and his buddy Billy Loomis have been performing double duty as the film's iconic killer, Ghostface. One that's both humorous and unscripted occurs when Billy and Stu are fumbling with a telephone with messy, bloody hands. Skeet Ulrich's Billy attempts to toss the phone to Stu, but Ulrich accidentally drops it on Lillard. The actor, rather than breaking character, decides to instead go with it, and utter the now famous, unscripted line.

Sure, we can debate until the cows come home as to whether or not "The Silence of the Lambs" was a horror film or a thrilling crime procedural, but one thing's for sure: Sir Anthony Hopkins' performance as Dr. Hannibal Lecter is absolutely terrifying. The brilliant cannibal killer installed himself almost immediately into the annals of horror with his speech about eating liver with fava beans and a nice chianti, but did you know that the not-so-good doctor's quick intake of breath and licking of his lips wasn't in the script? The act is sudden, unnerving and performed off the cuff, but it adds so much menace to the Lecter character, to the point where we can’t imagine the scene without it.

Andrew Robinson's career as a character actor has been full of iconic and memorable roles, but he was pulling double duty on "Hellraiser," playing both nice guy dad Larry Cotton and a later version of his sleaze ball brother Frank. Robinson's ability to move back and forth between personality extremes serves the movie well, particularly when Frank, now wearing his dead brother's skin, is caught by the Cenobites after a trap is laid by his niece Kirsty. Frank's final line in the script was a generic expletive, but Robinson instead decided to go Biblical, uttering this verse.

Sometimes it's all about the little things. Jamie Lee Curtis' Laurie Strode sings an improvised song to herself early on in John Carpenter's 1978 horror classic. The song was composed on set as an unscripted piece by Curtis, Carpenter and producer Debra Hill, an otherwise innocuous little ditty that's still an interesting character piece. What makes the song even cooler, however, was its callback in David Gordon Green's 2018 sequel. Green had a band compose and perform a version of that song to be used as a source cue during the scene when the father and son are returning from a hunting trip. Now that's what we call doing your homework.

"Rowdy" Roddy Piper was a pro wrestling legend long before he appeared on the silver screen as a horror and action hero. That said, Piper's natural charisma and ability to ad-lib during wrestling promos translated well to the world of cinema, particularly with this iconic line from John Carpenter's 1988 cult hit. Piper enters a bank wearing a fresh pair of alien sunglasses that enable him to see the hidden subliminal messages placed in the world around him. Then, cool as a cucumber, he busts out with this unscripted gem. Honestly, in the hands of anyone else, this line might have come across as hokey, but Piper's confidence ensures it hits another level of effortless cool.

#3: Congratulations! It's a Chestburster!

Pop quiz! Which is better: "Alien" or "Aliens?" Trick question: they both rule, and feature some super memorable unscripted moments as well! Bill Paxton's "game over" line as Private Hudson was the result of a little bit of character building from the actor, while the first film's iconic chestburster scene was something else entirely. The actors in question knew something was going to happen when the alien made its appearance, but they weren't told exactly how it was going to make its grand entrance. Director Ridley Scott was determined to generate genuine reactions from his actors, and he got exactly that, particularly from Veronica Cartwright, who reportedly passed out after her horrified reaction was caught on camera for posterity.

Making a movie is never easy, and making "Jaws" really wasn't easy for then-fledgling director Steven Spielberg, who had yet to become the household name he is today. As a result, Spielberg often butted heads with producers David Brown and Richard Zanuck, who reportedly weren't particularly generous with funding for this troubled production. Soon, a running gag was being joked about by cast and crew, ribbing Zanuck and Brown that they were "gonna need a bigger boat." Roy Scheider liked the line so much that he tried to fit in wherever he could, eventually finding that perfect sweet spot that we love to quote each and every time we watch the film.

Stanley Kubrick was both famous and infamous for his perfectionist tendencies, an obsession that would often lead the director to require what felt like endless amounts of takes from his actors. "The Shining" was one of those films, an experience that reportedly pushed some of its cast, such as Shelley Duvall, to the breaking point. Speaking of breaking, the scene when Jack Nicholson's Jack Torrance smashes through a door to a cowering Duvall featured one of horror's most quoted lines of all time. Of course, Nicholson was only quoting Ed McMahon's famous line from "The Tonight Show Starring Johnny Carson," but the decision was also unscripted and improvised, a happy accident within what's otherwise a dark and disturbing horror classic.
Comments ∧