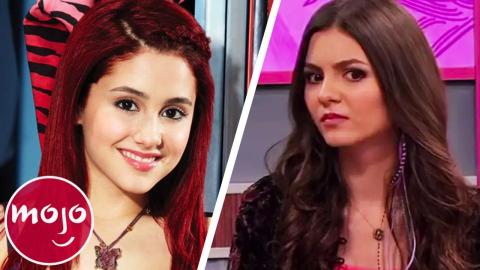 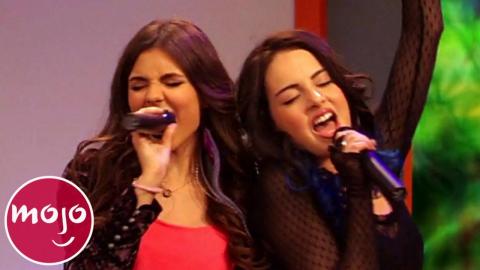 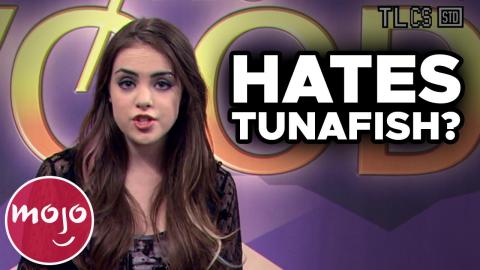 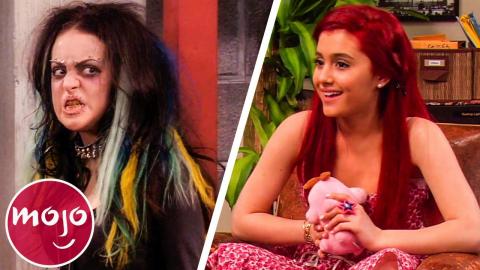 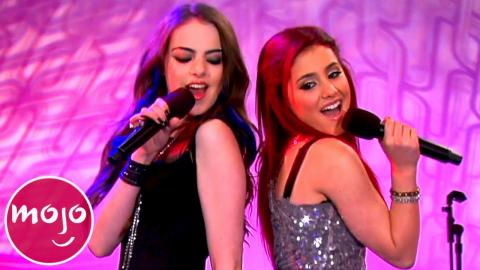 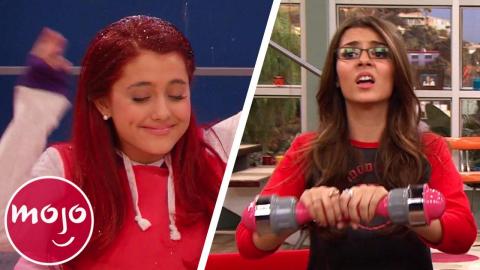 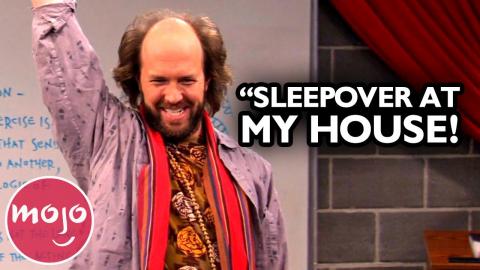 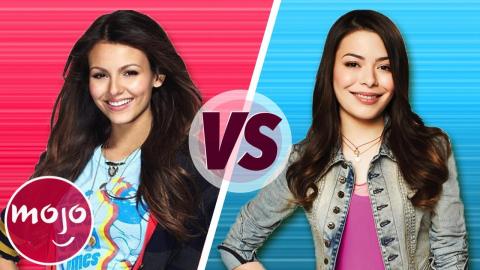 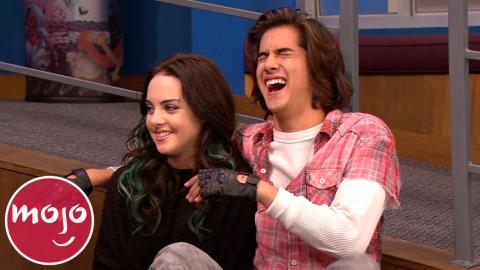 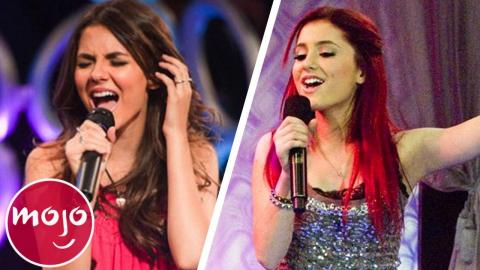 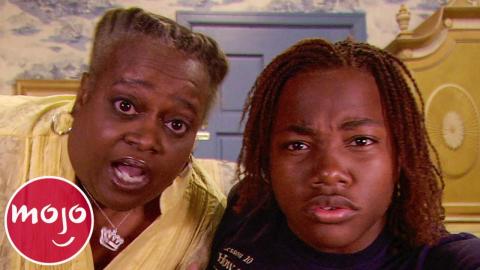 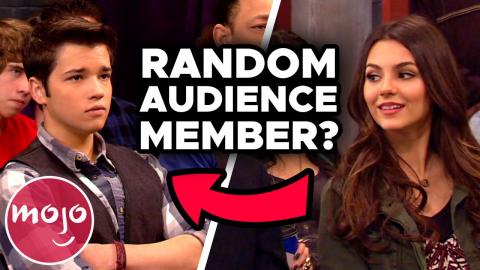 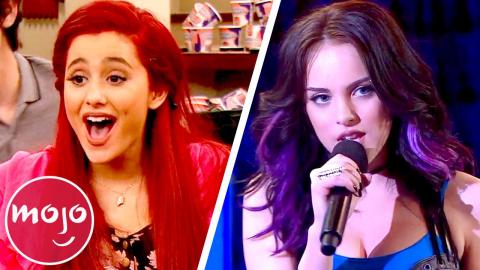 VOICE OVER: Elise Doucet WRITTEN BY: Spencer Sher
There are a lot of behind the scenes secrets about Victorious you didn't know about. For this list, we're taking a look at fun facts you probably didn't know about this Nickelodeon show. Our countdown includes short condiment bottles, Cat's catchphrase was stolen from another show, the single feather earring, and more!
Transcript ∧

Wait, Ariana Grande isn’t really a redhead? Welcome to MsMojo, and today we’re counting down our picks for the Top 10 Behind-the-Scenes Secrets About Victorious.

For this list, we’re taking a look at fun facts you probably didn’t know about this Nickelodeon show. Let’s get to it.


Much was made about “Victorious’” abrupt ending, with Victoria Justice stating that it was “a little shocking and a little bittersweet”, but that “we all want to do our own thing and continue to grow.” Despite some claiming that the show was ending due to a cast feud, Dan Schneider pointed out that Nickelodeon rarely keeps shows on the air for more than 60 episodes – regardless of how successful they are. As such, “Victorious” was cancelled during its third season. Instead of accepting their fate, Schneider and co. decided to split season three into two parts, thus creating a season four. The move didn’t go over great, as a proper finale was never shot, leaving many fans upset.

If you picked up on this behind-the-scenes fact then congratulations, you have the eyes of a hawk! In some of “Victorious’” early episodes, the cast can be seen sitting around a table and talking. However, due to the size of the ketchup and mustard bottles, their faces were partially obstructed. To solve this objectively funny problem, the show’s prop department was forced to make specially designed bottles that were a little smaller. It may have been an easy solution to an odd problem, but saying it out loud still makes us giggle.


While most sitcoms are filmed on a set, showrunners often choose to sprinkle in shots of real-life locations to remind the audience that despite the silliness of the plot or characters, the show is still taking place in our world. “Victorious” was no different. While the show benefitted from having its own soundstage (a rarity for Nickelodeon productions), exterior shots of fictional places like Hollywood Arts High School and the Asphalt Café were still needed. The nearby Burbank High School subbed in for Hollywood Arts (digitally altered to reflect this, of course), while a location just outside of Nickelodeon and facing Sunset Boulevard doubled for the Asphalt Café.

#7: Cat’s Catchphrase Was Stolen from Another Show


“Victorious” showrunner Dan Schneider has been in the business of making children’s TV shows for a long, long time. One of his most successful small screen endeavors was “The Amanda Show”, which aired from 1999 to 2002. It was from that show that Schneider plucked a catchphrase and recycled it for use on “Victorious”. Cat’s iconic “What's that supposed to mean?", which is often said in inappropriate situations, started its life as Misty’s catchphrase on “Amanda”; and she also had a habit of using it at ill-fitting times. If you had as many TV credits under your belt as Schneider does, you’d probably re-use a thing or two as well.

#6: The Ponytail Connection Between Grande & Schneider


Dan Schneider once quipped, “As everyone who works for me knows, I almost never let the girls wear ponytails on my shows”. While that’s an objectively weird stance to have on something as incongruous as ponytails, Schneider apparently never failed to enforce the rule. However, he made an exception for the season one episode "Stage Fighting", in which Tori is forced to tidy up a large mess. Oddly enough, Ariana Grande also wasn’t a fan of ponytails. However, due to the negative effects that years of dying her hair red had, she was forced to rock an updo at the onset of her music career. The look has since become one of her most iconic.


When she was younger, Victoria Justice loved feathers. In 2019 she told US magazine, “I went through an entire phase when I was like — the beginning of Victorious — 16, 17, where I was obsessed with feathers.” This obsession manifested itself in the form of a single feather earring, which Justice wore for much of her time on the hit Nickelodeon show. Apparently she would hit up a flea market before shooting and she had “20 different pairs of feather earrings — and every day was a different color feather.” Now go re-watch every episode of “Victorious” to see if you can spot them all!


Making a sitcom doesn’t come cheap. You have to build sets, design costumes, pay the actors and the crew and acquire and/or record songs. Seeing as how music was one of the show’s focal points, paying for the actors to record songs in a studio was a BIG expense. It was so big in fact, that the music budget started eating into other aspects of the show. Namely, costumes. As some fans may have already noticed, characters on “Victorious” often wear the same clothes in multiple episodes. This was done to cut costs, but in the end, it added to the realism of the show. Because let’s be honest, no teenager has an endless supply of original outfits at their disposal.

#3: Only 4 Actors Appeared in Every Episode


“Victorious’” primary cast is made up of Victoria Justice, Elizabeth Gillies, Ariana Grande, Avan Jogia, Leon Thomas III, Matt Bennett and Daniella Monet. However, of those seven only four managed to appear in every episode of the show. Can you guess which ones? If you guessed Justice, Gillies, Bennett and Thomas, congratulations! You pay really close attention to the shows you watch! While there wasn’t a huge discrepancy between these four and the other three, Jogia, Grande and Monet all missed multiple episodes between seasons 1 and 4. Leading the pack was Daniella Monet, who was absent for nine episodes.

#2: Not All Hair Color Was Natural


Hair again? Yup! Okay, this time it has nothing to do with ponytails, we swear. When Victoria Justice, Ariana Grande, Elizabeth Gillies and Daniella Monet were cast they were all brunettes. Unfortunately, allowing all four to retain their natural hair color wasn’t going to work, as it was seen as unnecessarily confusing for the audience. So, Grande became a redhead and Gillies added streaks to her hair. Justice and Monet were the lucky ones, as they got to keep their natural hair colors. However, Monet would sport blonde highlights in her dark brown hair in later seasons.


Rumors of a feud between Victoria Justice and Ariana Grande have been circling for years. Things reached a fever pitch when Grande admitted to Seventeen Magazine that she once “worked with someone who told me they’d never like me," and that it caused her “to stop being social and friendly.” Fans were quick to assume that the person in question was Victoria Justice. However, during an interview on “The Meredith Vieira Show”, Justice claimed she and Grande were fine and that Grande had even texted her to confirm she wasn’t talking about her. Grande then stated publicly that she was talking about someone else entirely, but many were not convinced. Both women continue to claim they got along just fine. Hmm, sounds a little fishy to us…
Comments ∧

Send
“This is juicy information i am seeing right now but how do you know this information?”