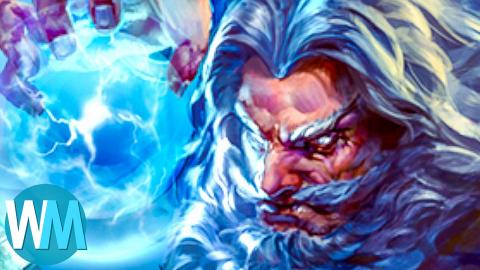 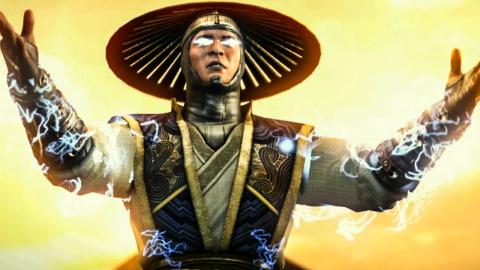 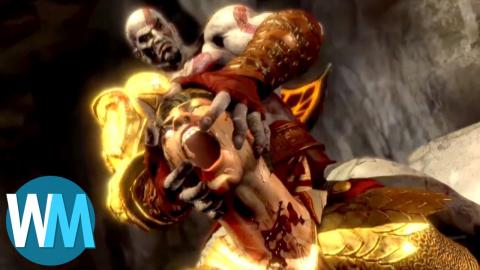 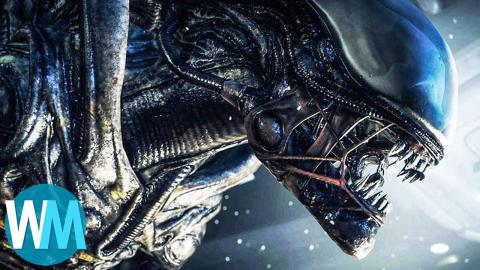 Another Top 10 One Hit Kill Enemies in Video Games 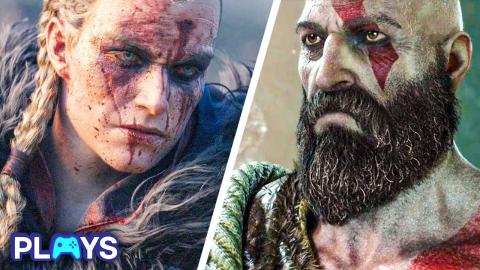 10 Games That Do Norse Mythology Right 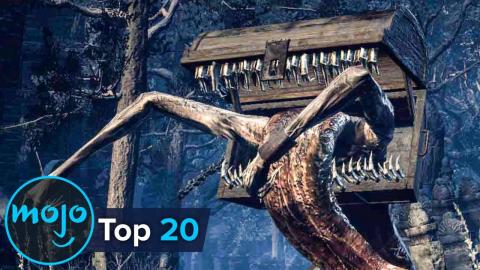 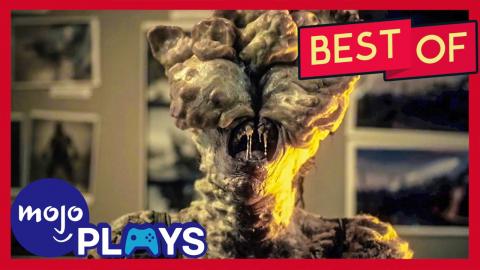 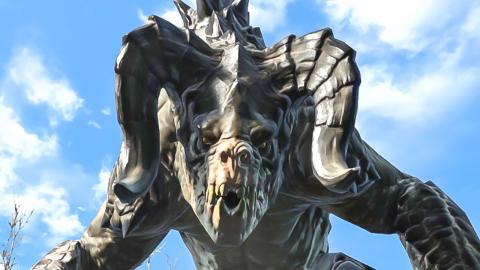 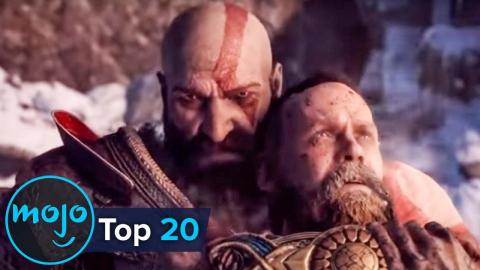 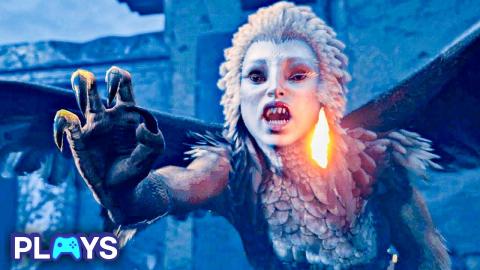 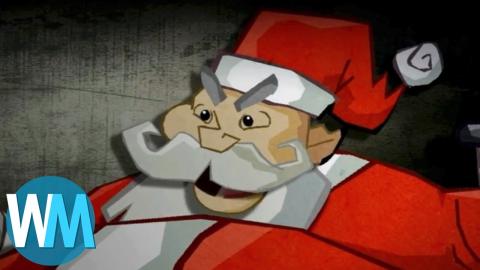 Top 10 Games Where You Kill Santa! 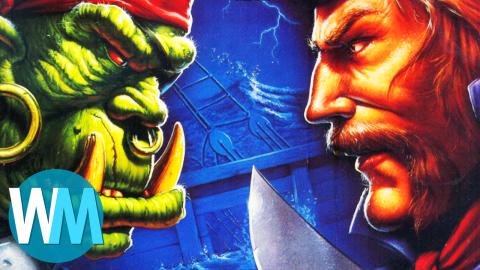 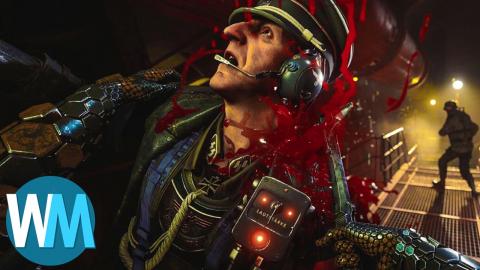 Top 10 Enemies That Are Most Fun To Kill

VOICE OVER: Dan Paradis
Deicide isn't a word that gets thrown around a lot these days...unless you're talking about these games, that is! Welcome to http://Watchmojo.com and today we're counting down our picks for the Top 10 Games Where You Kill God!

Top 10 Games Where You Kill God

Deicide has never been so fun. Welcome to WatchMojo.com and today we are counting down our picks for the top ten games where you kill God.

For this list, we’ll be looking at the games where you end up slaying a deity. These can range from icons of mythology to Gods that only exist within the game itself. As long as they’re noted to be some sort of divine entity and you end up taking them out of commission, its eligible! As expected, we’ll be going into major spoiler territory here, so a spoiler alert is now in effect.

Considering the inhabitants of this epic sci-fi fantasy live atop the frames of two frozen giants that are locked in eternal conflict, the creator of all things turning out to be a major jerk isn’t that far removed from reality. Once a mere human, the villainous Zanza essentially became God after he wiped out and recreated the entire universe, making him the first being in all of existence. As it turns out he wasn’t exactly benevolent, as he desires to ensure the cycle of cosmic destruction remain in motion. Unluckily for him, Shulk isn’t exactly a god-fearing man.

Two words: Kefka Palazzo. As the villain everyone loves to hate, he had already cemented himself as a wicked creature due to the mass casualties he caused along with his trademark nihilistic psychosis. And that’s just when he’s human. After unleashing the full, untapped power of the Warring Triads, Kefka not only lays waste to the entire world, but becomes its new God of Magic, striking down millions at a time from on high. Selfish and vile to the bitter end, he not only made for one epic boss battle, but one of the most destructive and truly evil deities to evil grace video games.

Ah, Greek Mythology; a treasure trove for video games to twist and turn until we’re left with some of the darkest boss battles to ever exist. That’s not exactly the case here, but it sure is entertaining! While the fast paced combat never lets up, the battles here are definitely on the lighter side of things, offering a fresh dollop of humour to the likes of Pandora, Viridi and Pyrrhon while still offering an engaging fight. But let’s be honest, the one that steals the show here is Hades, whose charisma and hamminess we just can’t get enough of. Not to mention you get to use the most angelic of weapons to defeat him…a giant freaking cannon!

Even before you were defeating godly enemies in the incredibly popular spin-off series of Persona, the divine were just fodder for the protagonists of this post-apocalyptic thrill ride. Throughout the course of the series, depending on your chosen alignment, players will find themselves in conflict with the archangel Michael, the God Yahweh, a force known as the Divine Will, the Judeo-Christian God and the physical incarnation of Merkabah. Needless to say should you favour the chaotic route in your RPGs then you are going to be doing a lot of god-slaying.

Honestly, did anyone really think killing the wife and kidnapping the daughter of a deity whose power stems from his rage was a good idea? Unfortunately for them Asura happens to be a one man-killing machine who finds death nothing more than an inconvenience. For the sake of revenge, this fallen demi-god literally destroyed his former heavenly comrades (one of whom happened to be bigger than the Earth, while another could cut the moon apart) before moving onto his true enemy, the creator of the entire universe, someone so powerful they could toss solar systems his way. Yeah, Asura beat the crap out of him too.

Demons have often been used as enemies throughout video games in some form or another. However, this one made it very clear that the final enemy you would be face was none other than the Lord of Hell, essentially the God of the Inferno, Lucifer. We might be slightly cheating here, but the final battle against this fallen angel is so viciously dazzling we couldn’t resist. After making his way through the nine circles, Dante finally clatches with the beast responsible for torturing his beloved Beatrice, leading to a battle with the devil himself as you hack him to pieces with Death’s scythe while layering him with projectile crucifixes. We couldn’t make this up if we tried.

In a franchise as rich with lore as this one, you’re bound to come across the occasional supreme being you think deserved needs to be Dragon Shouted into oblivion. Throughout Tamriel, the general consensus falls to the Nine Divines as the main body of heaven figures, but we can’t exactly kill them. However, the same doesn’t apply to the Daedric Princes or the Dragons, who are still godly in their own twisted ways. Mehrunes Dagon and Hircine are both defeated over the course of the series, while you literally kill Alduin in Skyrim’s afterlife. Since Alduin is the firstborn of Akatosh, the Dragon God of Time, we’re totally counting it as a god-kill!

How could we not include a title whose entire premise revolves practically every major God tearing each other apart? In this MOBA, players can choose to battle as iconic figures from Greek, Japanese, Hindu, Mayan, Roman, Norse, Chinese, and Egyptian mythology, where they have to use the specific skills in order to claim victory over the rest. The colourful reimagining of characters, the sometimes disturbing interpretations of lesser deities like Thanatos and Scylla, not to mention the lethally awesome abilities all equate to quite the divine royal rumble.

She fights the forces of Paradiso and the Inferno on a daily basis, so it’s no surprise that our favourite witch has laid the smack-down on one or two supposedly immortal beings. The first of these was Jubelius, who planned to spread heaven’s control over the Trinity of Realities. In response to this, Bayonetta used her ultimate summon to literally punch the creator so hard she was sent flying into the sun. Following on from this was Aesir, the being who forged the Eyes of the World and sought to rule over everything. What did Bayonetta do? Bring forth a being made of both light and darkness so powerful that it universally dropped kicked the God of Chaos.

Before we reveal out number one pick, here are a few honourable mentions.

Ares, the Sisters of Fate, Poseidon, Hades, Helios, Hermes, Hercules, Cronos, Hephaestus, Hera and Zeus; Kratos wrote the book when it came to dispatching Gods in the goriest yet most satisfying way imaginable. After quite a few betrayals, the Ghost of Sparda is deadest on getting his revenge on the Gods who deceived him, and is willing to kill his way up Mount Olympus in order to get it. Every deity eventually falls under his heel, and no surprise Kratos saves the most painful and brutal deaths for Zeus and his crew. We’re not quite sure who got the worst of it since many were beaten into a bloody stain, but getting your head ripped off can’t be a pleasant experience.