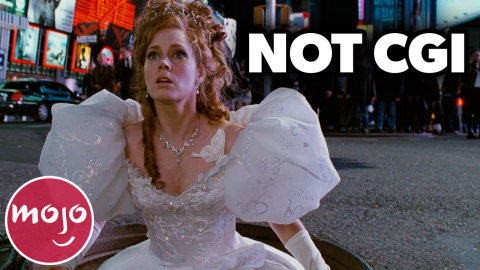 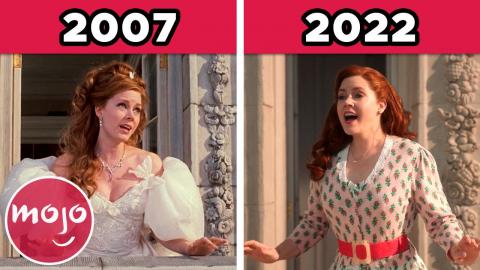 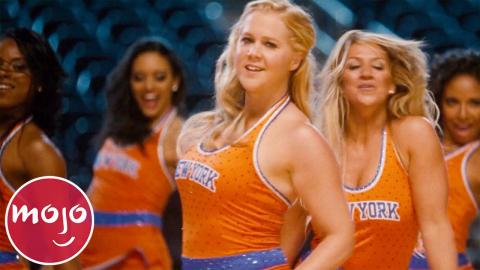 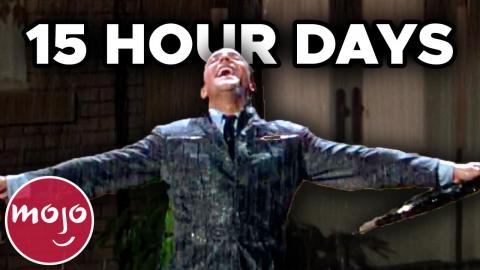 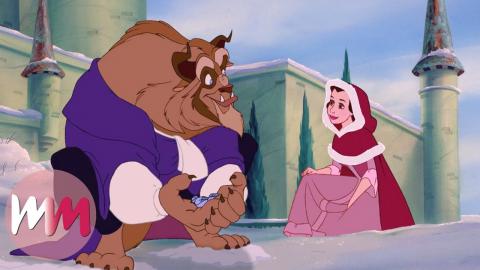 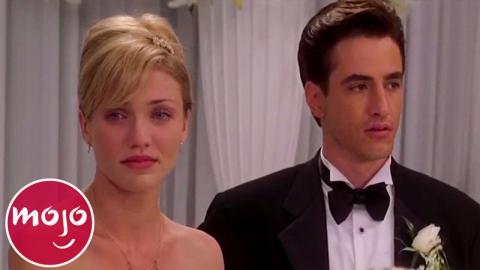 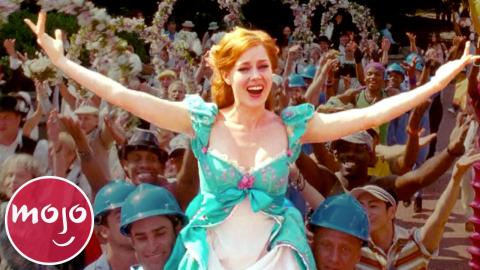 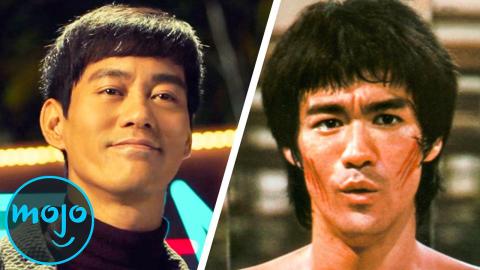 Top 10 Behind the Scenes Secrets of the Ip Man Franchise 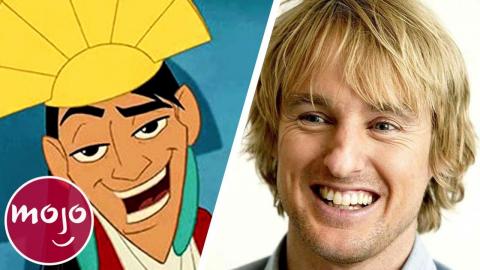 Top 10 Disney Movies That Almost Didn't Get Made 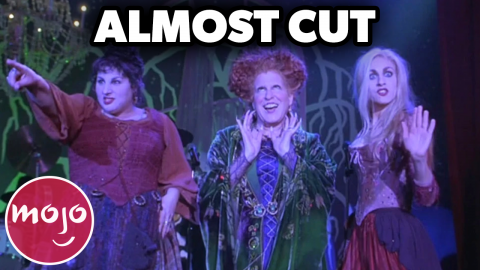 Top 10 Behind the Scenes Secrets About Hocus Pocus 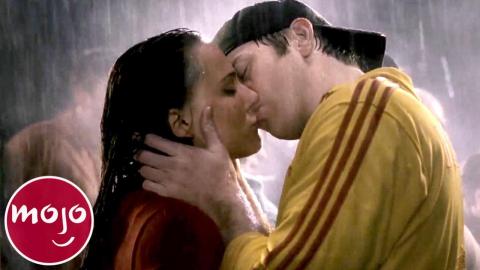 Top 20 Kissing in the Rain Scenes in Movies

VOICE OVER: Emily Brayton WRITTEN BY: Tal Fox
These behind-the-scenes facts will leave you enchanted. For this list, we'll be looking at the most notable stories and small details from the making of this 2007 film that will make your next rewatch all the more magical. Our countdown includes Idina Menzel's axed song, the director had an on-screen role, disney outsourced the animation, and more!
Transcript ∧


Welcome to MsMojo, and today we’re counting down our picks for the Top 10 Behind the Scenes Secrets About Enchanted.

For this list, we’ll be looking at the most notable stories and small details from the making of this 2007 film that will make your next rewatch all the more magical.

Which behind-the-scenes secret enchanted you the most? Let us know in the comments.


What’s harder: walking around in a 45-pound dress or slaying a CGI dragon? Amy Adams would probably say the latter — although the gown would be a close second. She told Collider that the scene where she takes on the evil queen in giant reptile-like form was meant to be longer. However, it might’ve just been too scary for their young audience. Still, she recalled long periods of being strapped in a harness and soaked by rain as she attempted to climb with a sword in hand. Yes, we can certainly understand how that might make for a grueling day at work. Nevertheless, this scene is exhilarating, and Adams totally slayed it!


We still can’t quite believe that renowned Broadway icon Idina Menzel doesn’t sing in the 2007 movie. However, that wasn’t the initial plan. Alan Menken and Stephen Schwartz penned a song called “Enchanted” for Menzel’s character Nancy and James Marsden’s Prince Edward. They were meant to sing it over a “happily ever after” montage at the end. However, the filmmakers decided to go in a different direction. “Enchanted” was shelved, and Carrie Underwood’s “Ever Ever After” ultimately became the finale song. It blows our minds that the creators passed on featuring Menzel’s voice on their soundtrack. The sequel is making up for it, so we can let it go this time!


It’s been noted that Disney characters don’t always possess the most realistic body shapes or dimensions. While the emphasis is usually on the princesses, you don’t see too many guys who look like Disney princes, either. So costume designer Mona May had her work cut out for her when she needed to bring that unrealistic image into live-action. She did this with padded material around Marsden’s chest, backside, and crown jewels. However, she couldn’t have known that her creativity would come in handy later. Remember when Prince Edward gets hit by the cyclist while singing out to Giselle in Central Park? Yeah, that’s actually Marsden getting actually hit, and they made sure the stuntman didn’t go easy on him. At least he had the padding to break his fall!


Although the ballroom dance sequence is pique romance, Adams confessed that creating that chemistry wasn’t so easy. That may feel hard to believe considering the person she was expected to hold closely is McDreamy, but it’s true. As a trained dancer, she had to unlearn several habits to make way for her dance partner. After some tension and a few sacrificed toenails, a professional ballroom dancer was brought in. He explained to the actress that the problem was that she wasn’t letting Dempsey lead. With some direction, Adams learned to let go and fully trust him to guide her around the dance floor. They say old habits die hard, but in this case, the payoff is evident.


Adams embodies Giselle so perfectly that it almost feels like the character was tailor-made for her. Yet earlier on in the film’s development process, studio executives cast their eyes on rom-com A-Listers like Reese Witherspoon and Kate Hudson. More shockingly still, execs were apprehensive about casting Adams at all. In the mid-00s, the actress was just breaking through with an Oscar nomination for “Junebug,” and there were concerns that she wasn’t well-known enough. However, director Kevin Lima knew that out of the 200 women they’d auditioned, Amy Adams was Giselle and compared it to how “Mary Poppins” made a star out of Julie Andrews. Clearly, Lima knew what he was talking about, and Adams easily won audiences over.

#5: The Script Was Completely Different at First


Although "Enchanted" hit the silver screen in 2007, its journey reportedly began 10 years earlier. While writing it initially, Bill Kelly was influenced by hugely popular films like "American Pie." The original script even featured a scene where Giselle's mistaken for an exotic dancer at a bachelor party. He was replaced and ultimately rehired in 2005. By that point, "Shrek's" tongue-in-cheek fairytale reimagining set a high bar. So Disney tried to replicate the magic with its own cynical fairytale send-up. However, Kevin Lima decided to embrace the tropes and "make it a love letter to Disney" instead. Indeed, we love how "Enchanted" pokes fun at the genre while still celebrating all our favorite parts of Disney movies.

#4: The Director Had an On-Screen Role


As we've established, Kevin Lima worked tirelessly behind the scenes to create this timeless Disney classic. However, what you might not know is that he also had an unplanned on-screen part— well, his voice did. The director was inspired by how Bob Hoskins interacted with the animated characters in “Who Framed Roger Rabbit.” Since Pip the chipmunk would be CGI'd in during post-production, he used a stuffed chipmunk to act out his scenes so that the cast could gauge where their eye line should be. His impression was so good that the editors decided that he should voice the character in the live-action parts. As if being the director wasn't demanding enough! Talk about chip-ping in and doing your part.

Yes, you heard us correctly! Even though this is a Disney flick, the animation giants outsourced those portions of the film to an external company. Why did they do that, you ask? They simply didn’t have the staff to accomplish it internally. In the mid-90s, traditional hand-drawn animations were phased out and replaced by 3D CGI. So by the time “Enchanted” was in production, Disney no longer had a department that could recreate that classic old-school style. They left the task in the capable hands of James Baxter and his company. Baxter had been part of the studio’s animation team before and during its renaissance era. It might not be very long, but that opening scene packs a nostalgic punch.

You couldn’t possibly have a Disney parody without plenty of easter eggs. These are as blatant as a secretly sinister old woman and a poisoned apple to as subtle as the hidden Mickey Mouse embellishments on Giselle’s blue dress. However, did you also notice the three Disney princesses hidden among the cast? Robert’s neighbor is played by Judy Kuhn, also known as Pocahontas’ singing voice. Additionally, the woman behind “Beauty and the Beast’s” Belle herself, Paige O’Hara, appears in a soap opera airing on TV. And Jodi Benson, who voiced Ariel, was also “Part of [this] World,” working for Robert as his secretary Sam. Now, if only we could figure out if Sebastian or Flounder are in the fish tank near her desk.

Some of Giselle’s Cleaning Companions Were Real Animals
Well, She Did Say It’s Always Nice to Make New Friends…

That Was No CGI, Amy Adams Really Crawled Out of a Manhole
Picture It: You’re in Times Square, There’s a Crew & Some Extras Around & a Woman in a Big Poofy Dress Emerges From the Ground

#1: Shooting “That’s How You Know” Was Very Complicated


Don’t you love it when you sing about sweeping romantic gestures, and everyone joins in? “That’s How You Know” is truly a magical scene, but it didn’t come without its challenges. The number was shot on location and took 17 days since the weather wasn’t always on their side. In addition to the principal cast, Lima also had to direct hundreds of dancers and extras around the vast park in what he called a “military operation.” Interestingly, an actor who played one of Bert’s old Chimney Sweep buddies in “Mary Poppins” was in the scene, “Step[ping] in Time.” As tricky as filming was, they really produced something extraordinary. This scene is iconic, and “That’s How You Know,” they did an enchanting job.
Comments ∧