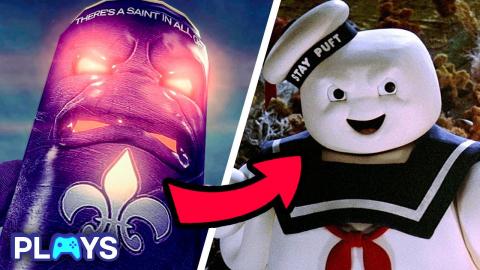 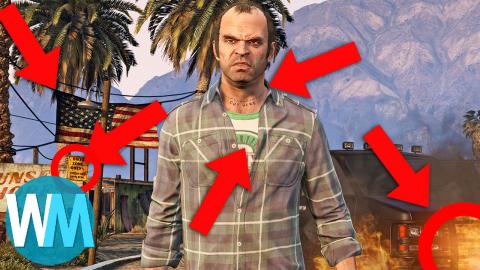 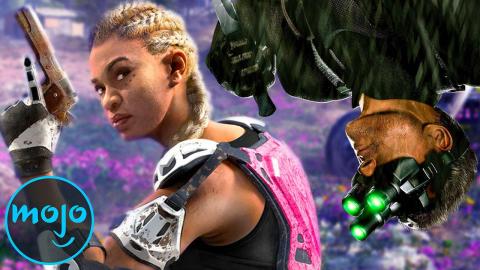 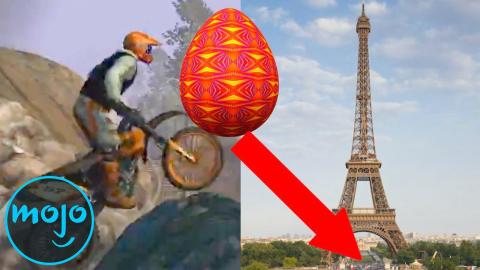 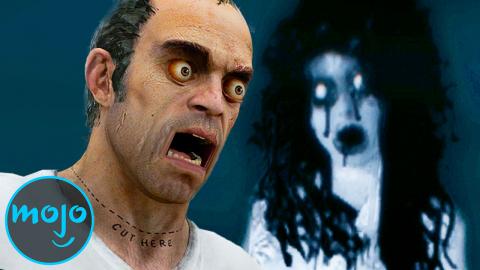 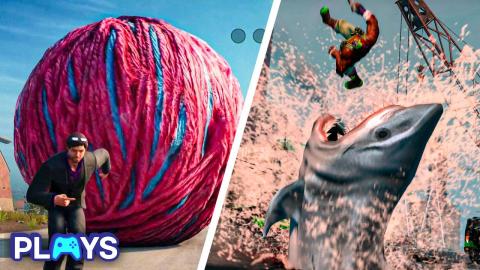 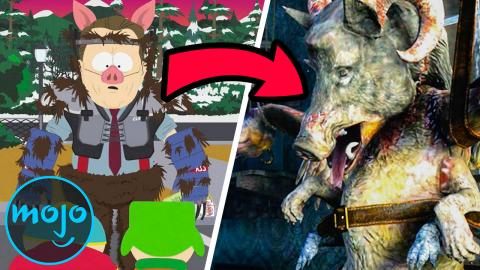 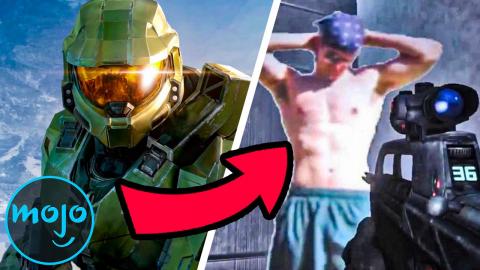 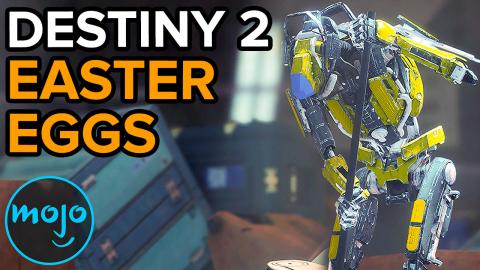 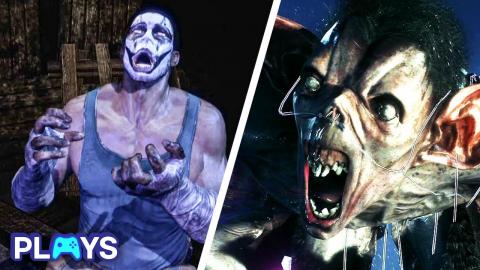 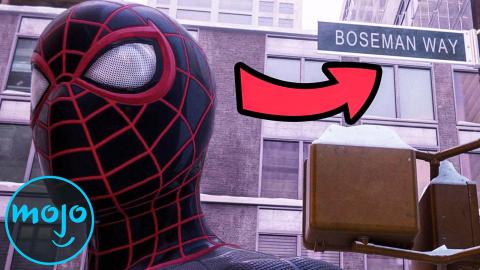 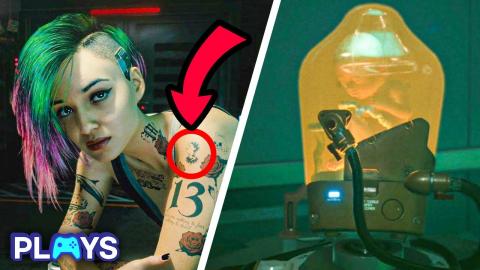 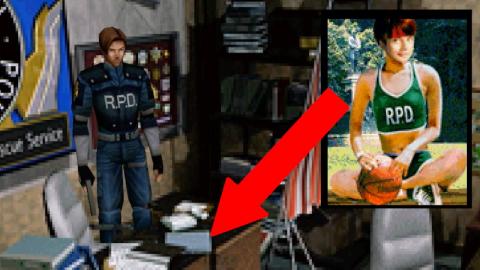 VOICE OVER: Aaron Brown WRITTEN BY: Caitlin Johnson
"Saints Row IV" has some of the funniest Easter Eggs of any video game. For this list, we're looking at the best pop culture and video game references in “Saints Row IV”. It's nothing against the other games in the series, we just think “IV” has the best ones. Our list includes Leave It to Beaver, From Asha With Love, Mass Effect, Inflatable Pilot, and more!
Transcript ∧


One of the many characters you need to rescue throughout the game is Johnny Gat, whose death was apparently part of a scheme by Zinyak to kill him years ahead of his planned invasion of Earth. So, Gat is alive – for now – and needs to be pulled out of the simulation. His simulation is a 2D, side-scrolling beat-em-up, a clear reference to popular games like “Streets of Rage” or “Double Dragon”. At the time, we weren’t seeing too many popular, new beat ’em ups, so it was a great change of pace to see it done in that classic, “Saints Row” style. And it was a refreshing way to mix up the main gameplay, which was getting increasingly ridiculous.

From Asha With Love


International woman of mystery Asha is a new character introduced at the beginning of the game, but she returns as one of your key allies throughout. Crucially, Asha is a British secret agent, and as such, all of her missions are puns on Bond movie titles, and her codename is 003. Her best mission, though, is “From Asha with Love”; its name copies 1963’s “From Russia with Love”, but the gameplay is a parody of the earlier “Metal Gear” games. They’ve even got the alert sound effect and plenty of references to the series in the dialogue of the guards you need to avoid – plus hiding in a cardboard box.


As you’ll learn over the course of this video, Volition loves 80s movies and references them with reckless abandon. You need to rescue Pierce, and he’s in your old HQ in Steelport being raided by Saints Flow energy drink mascots. But it gets better: outside, you’ll hear inhuman roars until the giant, monstrous can of Saints Flow – called “Paul” – reveals itself. Not only is this clearly an homage to the Stay Puft marshmallow man from “Ghostbusters”, but it's a wider reference to kaiju movies more generally. The sounds it makes are definitely reminiscent of Godzilla. It would be a perfect mission if you didn’t have to worry about reviving Pierce constantly.


One of the more notorious collectibles from “Saints Row III” were the many blow-up dolls scattered throughout the city. The blow-up doll returns in a small Easter egg in “Saints Row IV”, as when you take a look inside the cockpit of your ship, you’ll see one there helping steer. This bizarre incident is, of course, a reference to the movie “Airplane!” and the inflatable autopilot, or, “Otto Pilot”. Luckily you never have to manually reinflate the blow-up doll flying your ship – then again, it wouldn’t be the weirdest thing that happens in this game.


Yet again we’re heading to the 1980s for this overt reference to the “Terminator” franchise. The Zin send these Murderbots to try and take you out, shooting you with mines and lasers. Luckily, they’re a lot easier to kill than the T-800 in the movie. Then again, the President of the United States is definitely a more capable fighter than Sarah Connor, so maybe that’s the reason. Regardless, the robots will hunt you relentlessly and if you destroy their lower halves, they’ll crawl along the floor and keep coming, just like Arnie at the end of the first movie. Will they be back in the reboot?


Another big video game reference, the third and fourth “Saints Row” games were being developed right around the time “Mass Effect” was at peak popularity. So, Volition decided to lampoon this most-popular franchise in the structure of “Saints Row IV”. You’re the captain of a ship flying around the alien base and in between missions, you can talk to the members of your crew. You can also press X to romance them all, and unlike “Mass Effect”, it doesn’t take the entire game to get to third base. And finally, each of your crew now has loyalty missions you can do. We wonder what BioWare thought about this.


Not satisfied with beat-em-ups or RPGs, “Saints Row IV” also turned its satirical sights on the world of FPS action games – and action movies, by extension. The opening mission sees you, accompanied by your trusty crew, helping Asha to perform an assassination. Right away, we’re seeing an homage to 1987’s “Predator”, as the helicopters fly in and “Long Tall Sally” plays. But then it changes to a direct parody of games like “Call of Duty”, arguably at its critical peak at the time, as you go in to save the world from the dictator of a purposely vague country. The mission is called “Zero Saints Thirty” for a reason, after all.

Leave It to Beaver


After being installed in the simulation by the Zin, it turns out that they thought the best way to keep the President trapped was to make them the protagonist in a 1950s sitcom. That sitcom is, of course, “Leave it to Beaver”, emblematic of the era. Your wife, Shaundi, makes you a delicious breakfast of pancakes while various brand sponsors appear on-screen. There are yet more jokes in this section, however, as it could just as easily be another meta video game reference, this time to the memorable Tranquility Lane level in "Fallout 3". You’ll also find references to 1950s and 60s movie titles showing at the drive-in, and there’s a song parodying “Mr Sandman” playing.


After briefly appearing as another character back in “Saints Row 2”, Keith David returned to play a fictionalized version of himself in the fourth installment. When the Boss needs to save their crew from within the simulation, Keith David is in a re-enactment of his iconic fight scene in 1988’s “They Live”. Roddy Piper needs to wake Keith David up to the conspiracy that the world’s elite are brainwashing ordinary people into being mindless consumers. Not only do you get to watch the fight again, but it’s got pretty clear parallels to the plot of the game and how Keith needs to be saved. And yes, it really was Roddy Piper voicing himself.


The entirety of “Saints Row IV” is really one giant “Matrix” reference, and was intended to be that way from the beginning. One working title for the game, back when it was still a DLC for “Saints Row III”, was actually “Enter the Dominatrix”. The alien simulation used to control the population of Earth after the planet is destroyed is EXACTLY like the plot of “The Matrix”, right down to your dramatic escapes from inside the alien pods. Your ship is uncannily similar to the hovercraft used by the main characters in “The Matrix”, as is the process for waking up your key allies and freeing them. It was even better than the relentless “Tron” parodies in the previous game.
Comments ∧