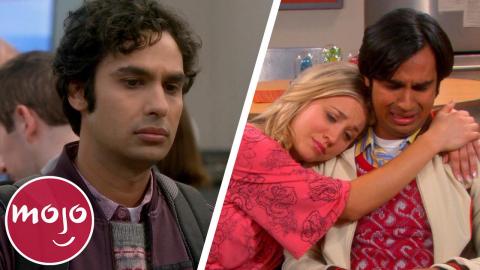 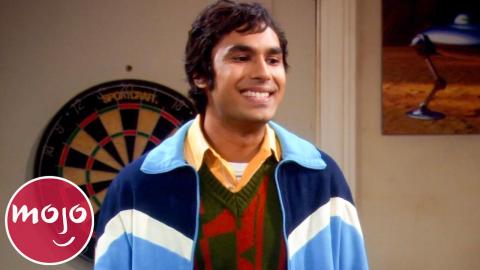 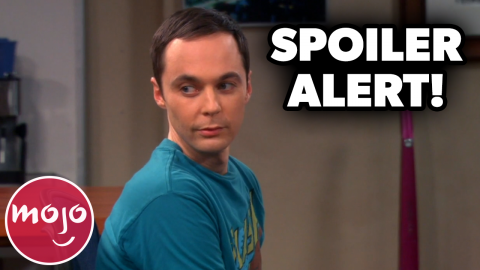 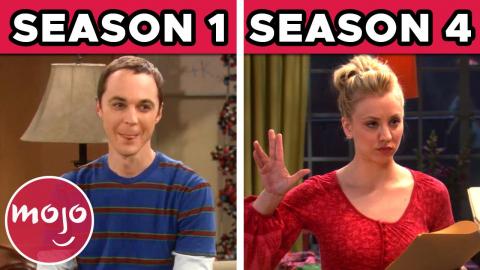 The Best Big Bang Theory Blooper of Every Season 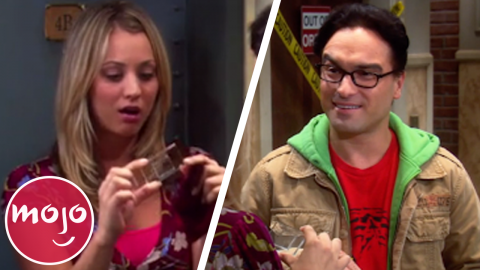 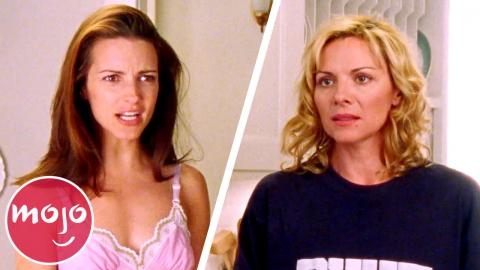 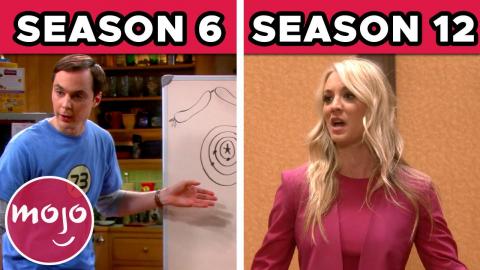 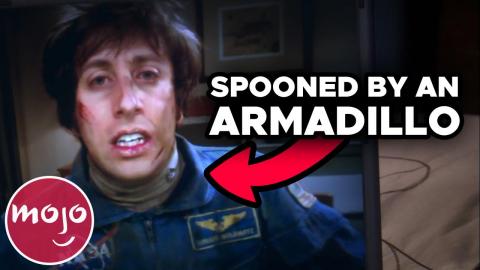 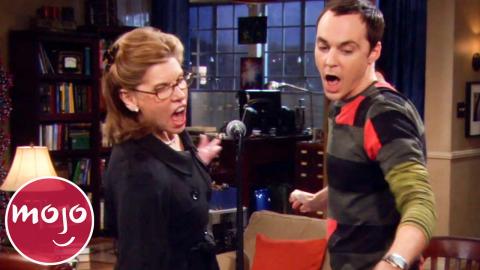 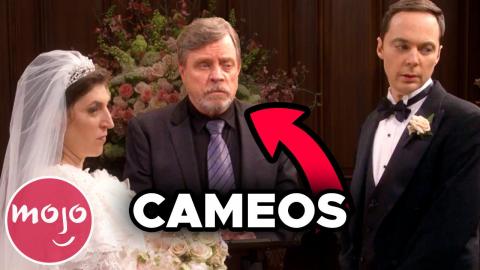 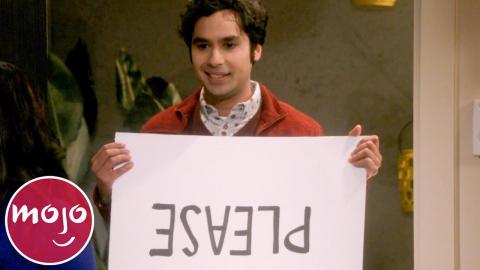 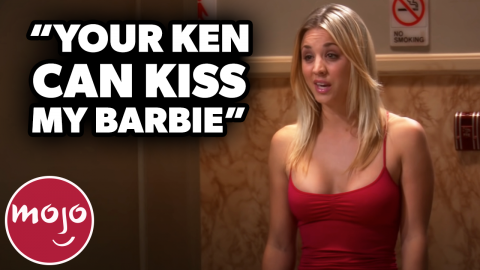 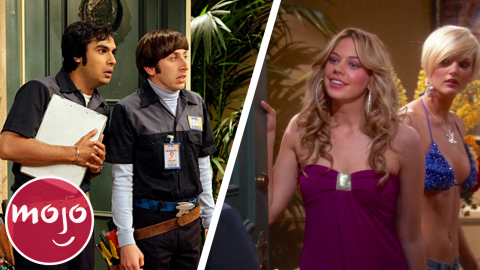 VOICE OVER: Phoebe de Jeu WRITTEN BY: Tal Fox
Raj deserved so much better on "The Big Bang Theory." For this list, we'll be looking at times where Rajesh Koothrappali was underappreciated by his friends or done dirty by the writers. Our countdown includes he's unlucky in love, he's a victim of cultural insensitivity, his career should be more celebrated, and more!
Transcript ∧


Welcome to MsMojo, and today we’re counting down our picks for the Top 10 Times Raj Deserved Better on The Big Bang Theory.

For this list, we’ll be looking at times where Rajesh Koothrappali was underappreciated by his friends or done dirty by the writers on the long-running popular sitcom.

How would you have liked to see Raj’s story wrapped up? Let us know in the comments.

#10: His Friends Were Reluctant to Help in His Time of Need
“The Escape Hatch Identification”


In season 10, Raj decides that it’s time to stop relying on his parents’ wealth and stand on his own two feet — this also means downsizing his apartment. But when he reaches out, none of his friends are willingly helpful. In fact, the Rostenkowski-Wolowitzs and Hofstadters respectively hold out, hoping that the other will offer accommodation first. We all know that if needed, Raj would open his home to any of his friends and probably have a candlelit dinner waiting for them too. Eventually, they do come through, but when he eventually overstays his welcome, he ends up living in an apartment above Bert’s garage.

#9: His Career Should Be More Celebrated
Various


Raj’s a successful astrophysicist who’s actually made some pretty significant contributions to his field. For instance, he helped design a space probe on Pluto and discovered several celestial objects. However, while his friends’ achievements are usually celebrated, he quietly got on with his career. We all remember when he was featured in “People” Magazine, but his friends weren’t particularly supportive even then. It baffles us how he went from appearing in the “30 Under 30 to Watch” list to almost losing his work visa in just one season. By the end, it seemed like his biggest claim to fame was an online feud with Neil deGrasse Tyson.

#8: He Genuinely Cares about His Friends
Various


Raj arguably has the biggest and warmest heart out of the entire gang. Sure, he can be a bit needy and whiny, but when necessary, he’s the friend who’s always got your back. There’s no bigger cheerleader or confidant than Raj, who’s always willing to share advice or simply lend an ear. He sincerely cares about his friends and everything that goes on in their lives. He’s always ready to celebrate the highs and commiserate on the lows. And who wouldn’t want a friend like that in their corner? It’s just a shame that the others don’t always appreciate his dedication and unconditional love for them.

#7: He Shows Sheldon the Most Patience
Various


Sheldon’s… let’s call them quirks, can be a handful and then some. Indeed, the other characters often find him incredibly tiresome. However, did you notice that Raj butts head with the brilliant oddball the least? That’s not to say they’ve never had their quarrels, but out of everyone, Raj’s most likely to give Sheldon the benefit of the doubt. And if you’ve watched even a single episode of “The Big Bang Theory,” you’ll know that’s quite an impressive achievement. This trait goes relatively underappreciated by everyone, specifically Sheldon. In fact, on occasion, the kooky genius has even tried to remove Raj from his social circle.


Since the pilot, it’s been abundantly clear that one-half of the Wolowitz-Koothrappali bromance is more invested than the other. Raj goes from dedicated wingman during Howard’s weird and creepy phase to becoming the perfect godparent to Halley. Meanwhile, Howard seemingly never misses an opportunity to mock his friend, disparage his feelings, or take advantage of his big-hearted generosity. Eventually, Raj realizes that his so-called bestie is hurting his self-esteem and starts implementing boundaries. Even so, he can never say no to Howard or any of the Wolowitzes. We hope that Howard really starts to appreciate what a good thing he has, especially after that dramatic airport scene in the series’ last season.


When we first met Koothrappali, we thought he might fill the role of the unexpected ladies’ man — how wrong we were. He’s been duped by a gold-digger, dated his phone, been stood up mid-date, and unknowingly slept with a married woman. We even revisit several disastrous relationships during that awkward past-girlfriends focus group. Even when there’s a glimmer of hope, it fizzles out, or is simply forgotten about. Do you even remember Yvette, the vet? We’re not saying he was always the perfect partner or that he needs a woman to complete him. But a rom-com ending with a romantic partner wouldn’t be amiss either.

#4: His Selective Mutism Is Used as a Punchline
Various


Raj’s afflicted with Selective Mutism until season six; he can’t talk to women he’s not related to unless he’s intoxicated or any of a very few other conditions are met. Despite being an actual debilitating condition, it became a prominent running gag. We’ve seen it hinder his love life and career — Howard, in particular, enjoys using it to tease his friend. It’s only after experiencing major heartache that he’s somehow cured. However, it briefly returns as he’s about to get intimate with Anu, once again deriding comedy from the situation. Apparently, the character was based on co-creator Bill Prady’s friend. So, in a way, this recurring joke was a disservice to Raj and anyone else dealing with this misunderstood condition.


Contrary to what “The Big Bang Theory” portrays, there’s nothing wrong with getting in touch with your feminine side. Indeed, Raj’s sensitivity and ability to connect with his emotions make him such a loveable character. Nevertheless, he often faces derision for being more “effeminate” and enjoying activities stereotypically considered girly. More than one character has even said that back in India, some believe him to be. Of course, his very close bromance with Howard is usually played for laughs too. Hey, “Big Bang Theory”: the past called, and they want their socially constructed gender norms back. You do you, Raj!


When the series isn’t poking fun at Raj’s femininity, it’s often ridiculing his culture and background. It could have been an excellent opportunity for solid minority representation, but instead, the character’s steeped in offensive stereotypes. His friends don’t shy away from racist jokes, even going as far as mimicking his accent — and even Raj isn’t above insulting his country of origin either. We appreciate that given the criticism that shows like “Friends” faced, “Big Bang” tried to include some diversity. But Raj is an outcome of a white western perspective, and we believe that the character deserved more than these sloppy and lazy jokes.

He Feels Like a Last Resort, “The Spaghetti Catalyst”
Poor Raj, No One Likes to Feel like an Afterthought

He Gets Mocked for a Statement Out of Context, “The Decision Reverberation”
His Openness to the Universe Almost Derails His Career

He Shows Bernadette More Support than Her Own Husband, Various
Everyone Needs a Godfather & Friend like Rajesh

He Draws the Short Straw in Group Costumes, Various
But at Least He Owned Catwoman

His Flair for Party Planning Isn’t Appreciated, Various
We’d Totally Be Up for a Koothra-Party Anytime

#1: He Deserved a Better Ending
“The Stockholm Syndrome”


The last season did a pretty decent job of wrapping up everyone’s stories — except one. Raj doesn’t hit a career milestone like the Fowler-Coopers, enjoy family life like the Rostenkowski-Wolowitzs, embark on parenthood like the Hofstadters or get a love story like Stuart. He does get engaged at one point, but even that doesn’t work out. The highlight was seeing him live out his rom-com fantasies when Howard chases him down at the airport. Other than that, his story arc leaves us with more questions than answers. Unlike another iconic sitcom finale, we’re left wondering if perhaps Raj should have got on the plane.
Comments ∧