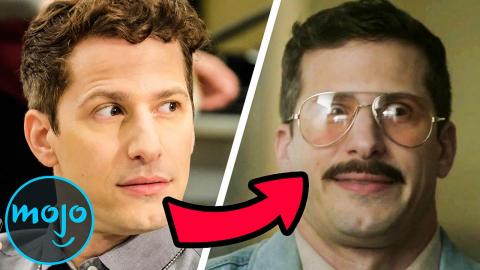 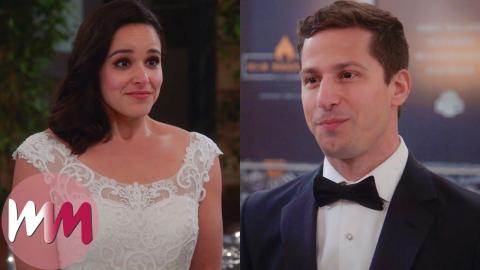 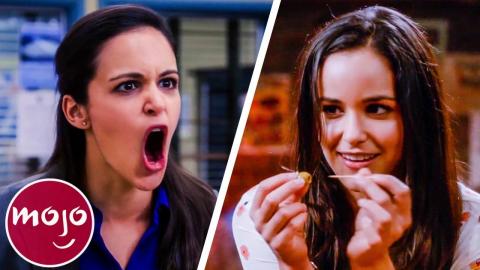 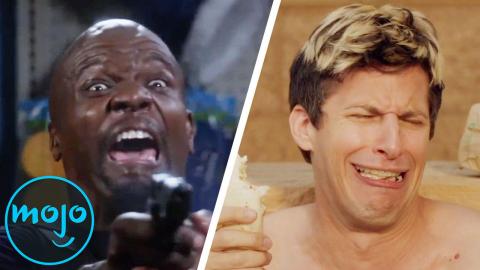 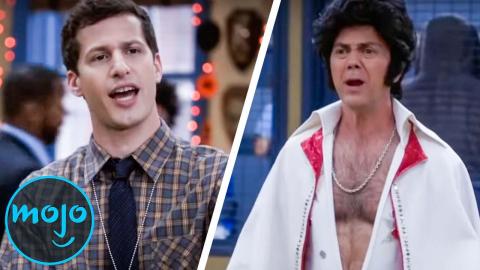 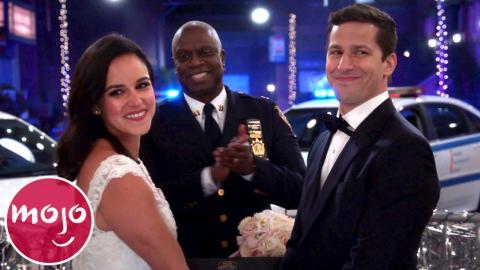 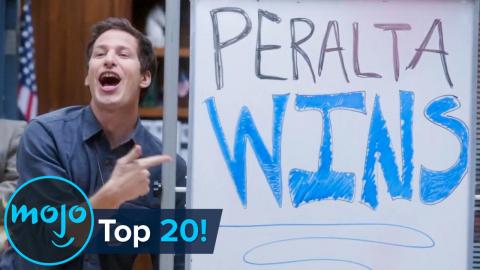 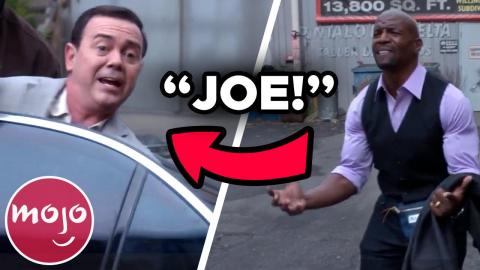 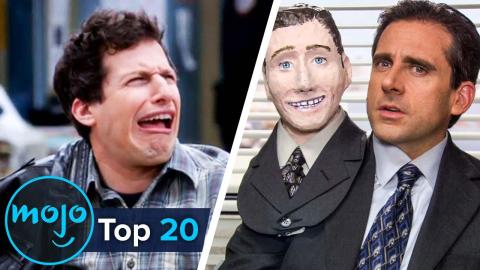 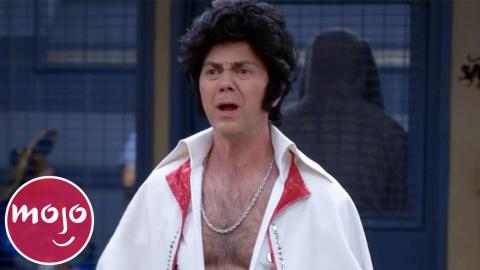 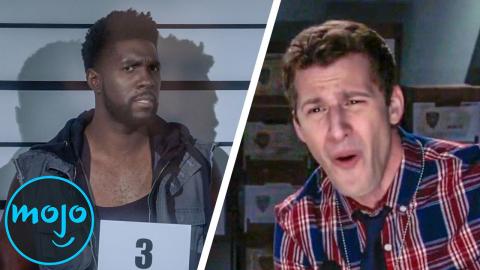 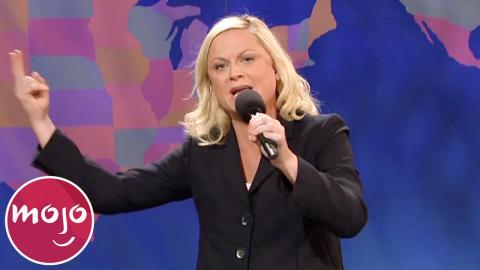 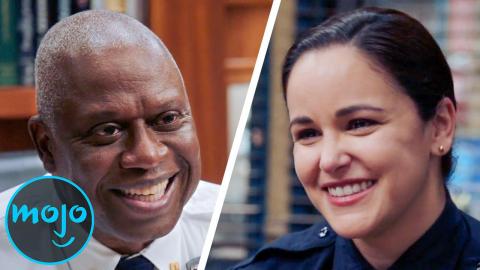 
Welcome to WatchMojo and today we’ll be counting down our picks for the top 10 funniest Jake Peralta undercover moments.

For this list, we’ll be looking at the funniest and most memorable moments from “Brooklyn Nine-Nine” that involve Jake Peralta going undercover and/or using an alias.
If there's a funny “Peralta-r” ego you think deserves to be on our list, please share it in the comments below!


After Charles Boyle hits it off with Genevieve, a woman convicted of robbing her ex’s art gallery, the bumbling detective sets out to prove her innocence. Like the good friend he is, Jake joins him for support. While Boyle’s disguise consists primarily of a new name and wearing glasses, Peralta puts a bit more effort into his character’s backstory. Sherwin Lamonde sculpts, paints, and works full time as a barista, but hopes to go part-time after he sells his first piece. Their combined effort to fit in with the pretentious art world is also hilariously inept. [“Hmm, cool – human chrysalis and whatnot…”]


When the Nine-Nine takes part in a tactical village, it’s right up Jake’s alley. And by that we mean that he sees it as an excuse to play make believe for a day. While he invents several alter egos for the occasion, including Vic Kovac, a former Navy SEAL who’s abandoned, our pick goes to Rex Buckingham. This secret agent persona is a British ballistics expert who’s popular with the ladies. There’s not much to the character, but any excuse for Andy Samberg to do a British accent is top grade in our books. Plus, Buckingham offers a segue for Jake to “definitely not” flirt with Amy.


In order to put away a corrupt civic leader, Jake puts his whole career on the line. With help from Amy and Captain Holt, he manages to secure permission to investigate a civic center that may have evidence. As part of their undercover efforts, the trio dresses up in some snazzy thrift store clothes and try to blend into a dance competition being held there. Along with seeing all of them show off their dance moves, Jake also breaks out an impromptu alias to make it past a guard and go upstairs. He claims to be Dave Blathis, a world-renowned fox-trotter. Dave is clearly a man of the world if he’s traveled to Barcelona.


Jake loves to come up with characters and Charles loves to join in. While investigating a crime scene at a jewelry store, they decide to roleplay as the thieves, whom Charles names and decides are French. Jake makes the addendum, however, that his character, Henri Renault, went to an international school and therefore doesn’t have an accent. By pretending to be the thieves, Jake and Charles manage to locate a cigarette butt smoked by one of their perpetrators. In the process, we learn that Henri’s accent returns when he gets excited. It’s a fun friendship moment between Jake and Charles and illustrates how well they work. Sometimes, being silly is actually the best way to get the job done!


For Gina Linetti’s swan song, she divides up her time by doing something with every squad member. With childhood friend Jake, the two of them try to get into an ultra-exclusive club to meet Mario Lopez. Gina pretends to be “Pamplemousse La Croix,” while Jake is her unnamed brother. The duo play over-the-top entitled heirs perfectly, using the threat of their fictitious daddy’s influence to talk their way past the front desk. After marveling at how the classiness of their environment is rubbing off on them, Jake decides to make a distraction so Gina can sneak in and he, of course, immediately gets caught. It’s a scene full of classic Jake and Gina interactions, plus some great shots at the uber-rich.


In order to bring in a drug lord, Jake is forced to team up with his arch-frenemy, Doug Judy, the Pontiac Bandit. To convince their target to set up a meet, Jake and Doug put their heads together to craft Jake’s Peralt-sona – Dante Thunderstone. As great as it is watching Doug coach “Dante” through stealing a car to prove their loyalty, their initial idea session for Thunderstone is even funnier. It has all the hallmarks of a classic Jake character – elaborate backstory, goofy name, mythological parentage. [“Some say that makes Zeus my dad!”] It’s a fun character and, honestly... we’d probably watch a movie about Dante Thunderstone if they made it.


When their lives are threatened by a gangster, Jake and Captain Holt’s husband, Kevin Cozner, are forced to stay in a safe house for months. Kevin begins to get fed up that he can’t even go to the library. So, naturally, he and Jake decide to disobey orders and visit the library incognito as some of the locale’s most frequent visitors: [“weird perverts.”] Sporting mustaches and channeling Samberg’s Lonely Island song “The Creep,” Kevin and Jake manage to make everyone in the library uncomfortable in short order, meaning that they’ll stay away from them. It’s both a hilarious moment and a sad commentary on the state of modern libraries.


Speaking of Kevin, he and Holt enlist Jake’s help when someone they both love is kidnapped – their dog, Cheddar. In order to make the handoff without putting Kevin in danger, they decide to have Jake impersonate Kevin. As talented an impressionist as Jake is, he still needs some practice to get Kevin’s mannerisms down. Seeing Holt and Kevin coach him through the process is great and the scene is full of excellent comedy. Jake also manages to do surprisingly good improv in the field. Plus, we now know exactly what we’re saying the next time we see a yellow crested warbler.


When Jake is invited to Doug Judy’s bachelor party, he inevitably has issues with his criminal friend’s…criminal friends. Especially after they steal 10 million dollars’ worth of diamonds! With his cover blown, Jake convinces them to pull a reverse heist. In order to distract the concierge at the hotel, Judy pretends to be representing Jake’s character “Matt Daniel,” Twitch’s most popular male ASMR performer. Jake’s breathy voice and “mouth sounds” are quite funny, as is Judy’s performance as his manager. As silly as Jake sounds, he could probably do well performing ASMR. We’re certainly soothed by how funny he is.

Cosplay, “Return to Skyfire”
Jake, Terry, & Rosa Nerd It Up!

Billy “Big Time” Jankowski, “Bad Beat”
His Virginity Is a Crucial Part of the Backstory

Vaughn Tom Tucker, “The Road Trip”
This Sailor’s a Tough Guy – “Cangela” Is a Lucky Woman!

#1: At a Mafia Wedding
“Undercover”


Jake has a lot of hilarious undercover roles. But arguably his funniest undercover moment occurs while he is in his best role of all – himself. Sort of. After spending six months undercover with a crime family, Jake is attending a wedding full of mafia members. He gives a speech and has some great banter with the other attendees. He also gets kissed by a surprising number of old men! But after a key phrase about dry meatballs, the wedding gets raided by the NYPD and Jake gets dragged away; playing up his outrage. His reunion with Captain Holt is as funny as it is heartwarming.
Comments ∧