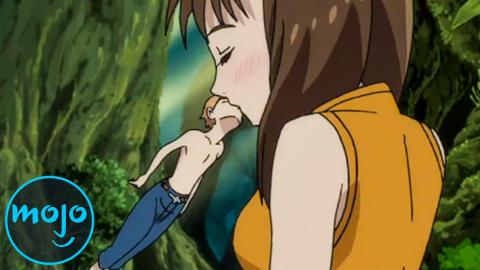 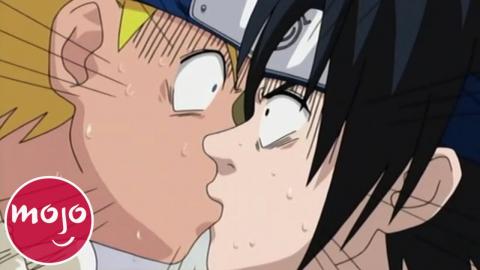 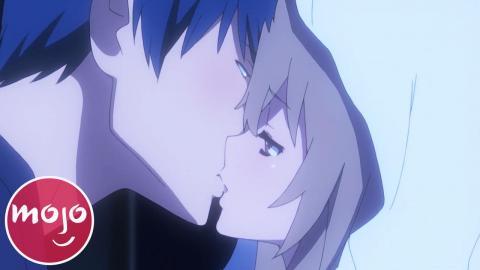 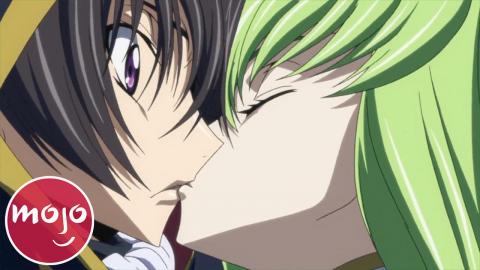 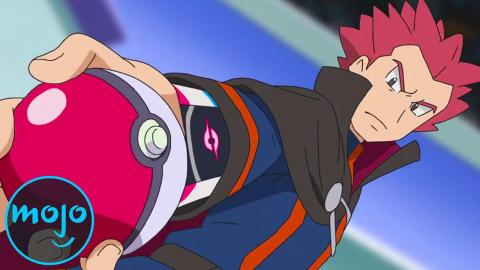 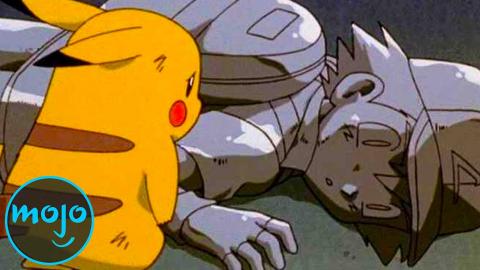 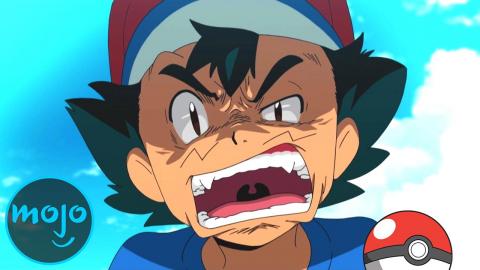 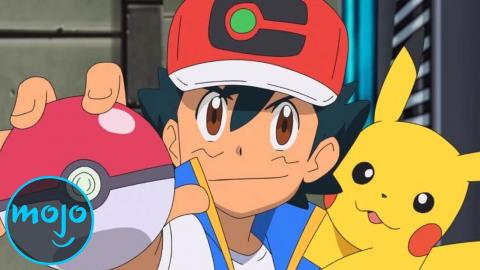 Top 10 Things Pokemon Wants You to Forget About Ash 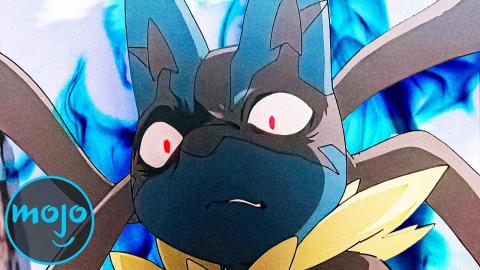 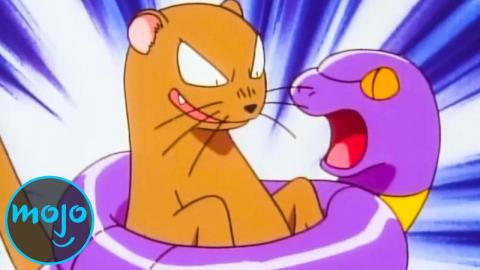 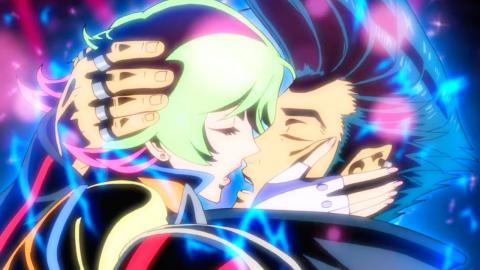 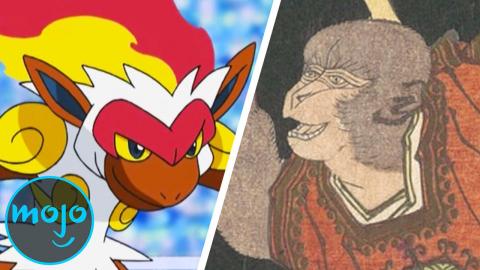 VOICE OVER: Ashley Bowman WRITTEN BY: Alex Crilly-Mckean
These smooches were too much for fans to handle! Join Ashley as he counts down the anime kisses that sent the internet by storm, as seen in series such as "The Seven Deadly Sins", "Gurren Lagann", "Pokemon", and more!
Transcript ∧

Welcome to WatchMojo, and today we are counting down our picks for the Top 10 Anime Kisses that Broke the Internet.
For this list, we’re going to be looking at the smooches across the anime-verse that caused fans to lose their damn minds, either out of joy or spite. Did we leave out the million-dollar make-out session? Let us know in the comments!

“Love, Chunibyo & Other Delusions! Take on Me” (2018)
It took a whole lot of fantasy battles, awkwardness, misunderstandings and all the crap that happened in heartthrob, but finally our favourite dorks in love pulled it off. Following on from their impromptu vacation, Yuta and Rin at long last get around to declaring their love for one another, which naturally leads to torrent of tears, happiness, and non-stop kisses. Seriously these two are so excited over the prospect of being in love that they let imaginations run wild, lighting up the ocean in the process!

#9: King Finally Gets Some

“The Seven Deadly Sins: Wrath of the Gods” (2019-)
Say what you will about this season’s animation - the romance subplots were to die for! After several bouts of amnesia and other inconveniences getting in the way of their happily ever after, Diane at long last recalls her shared history with King, and all that he went through in order to protect her, landing him with a giant sized kiss as well as an overdue confession of love. Let’s be honest here guys, it was the best romance of the whole show, and it was top of the Netflix trending page so everyone got to enjoy it!

“From the New World” (2012-13)
Usually when canoodling occurs in an anime, fans just lose their mind for a day and things go back to normal. Rarely does a kiss somehow become the topic for an entire thesis. While seemingly coming out of nowhere, the sudden kiss shared between friends Shun and Satoru caused viewers to type out whole essays as to how in this future the act of intimacy has become more casual, how their interaction is a metaphor for the titular new world, and so on and so forth. Perhaps they’re right, or perhaps it was just a horny Tuesday?

“White Album 2” (2013)
I mean…there must have been a more tactful way to handle this, right? Despite loving Haruki, Setsuna decides to take him to the airport so he can confess his feelings to Kazusa before she leaves. Works like a charm. And how is Setsuna’s moment of sacrifice rewarded? By watching the boy she loves and her rival manically make out in public despite the fact they both know how much this would hurt her. It’s seriously depressing. No matter where you stand on the best girl debate, this ending was just painful to watch unfold.

“The Last: Naruto the Movie” (2014)
How to reveal a long-teased anime pairing in the most extravagant way imaginable in three easy steps. One, have the main character actually get it through his head that the shinobi beauty whose been crushing on him for years is total waifu material. Two, have some weirdo from space kidnap her, leading to a thrilling chase that only further cements the couple’s affections. And three, end the whole thing by having them blast into the air and exchange their first kiss with the whole moon serving as a backdrop. Naruto doesn’t do anything by half measures, clearly!

“Gurren Lagann” (2007)
Don’t get us wrong, we love Yoko, earning a kiss from her is no easy feat and something to be treasured. It’s also apparently a death sentence. Think about it. Kamina steals one from her, they have their romantic moment, and by episode’s end he’s dead. Kittan tried his luck several years later, swept her off her feet, and what was the result? Dude sacrificed himself to save the rest of Team Dai-Gurren from the Anti-Spiral. Maybe it would be in everyone’s best interest if she just remained single!

“Oreimo” (2010-13)
There’s only so much fanservice, teasing and narrative acrobatics you can do in the incest subgenre before you’re backed into a corner, realise you’ve got nowhere else to go, so you might as well have the two leads get married and smooch the day away. Even if they’re blood related. Even if it makes the far more appealing love interests redundant. And even if it makes the audience feel aggravatingly nauseous. Overall, Kyousuke and Kirino are terrible for each other. The sibling angle just adds another layer of depravity onto this crap-cake of a pairing! But they went ahead with it anyway!

“Pokémon” (1997-)
This one was a doozy. After countless episodes and numerous female companions across his seemingly never-ending Pokemon journey, Ash finally got to first base! And it was with Serena of all people? Look, there’s nothing fundamentally wrong with Serena, if anything she’s probably one of the better tag-alongs, and at least she had the Pokeballs to actually go ahead and confess her feelings. The issue that fans had was that it wasn’t Misty…or May, or Dawn, or any of the other members of his PokeHarem that they felt should have been the one to get that all important first kiss. But X&Y fans certainly rejoiced!

“Darling in the Franxx” (2018)
You know you’ve stepped in it when you’ve got your own hashtag trending. While Hiro and Zero Two were not without some deep-rooted issues, they were nonetheless in love with one another, having to face the awful truths that outside forces were dead set on keeping them apart. So, what does Hiro’s most trusted companion do in his hour of need? Moves in like a viper and forcibly kisses him, throwing in her confession at the worst possible time, and generally trying to make the whole thing work in her favour. And just like that, her likability plummeted! Fans were NOT happy.

“Yuri on Ice” (2016)
Typical Yuri – performs a breath-taking sequence on the rink that elevates his character and career to new heights, and the only thing anyone can talk about is how his coach locked lips with him on the ice. Granted, for many fans this singular moment was a monumental win, for the ship they adored as well as LGTBQ representation in mainstream anime. It’s all kinds of adorable, and the jubilation shared between the two makes for a pivotal narrative point. Not that fangirls could see it given how they had fainted by then…