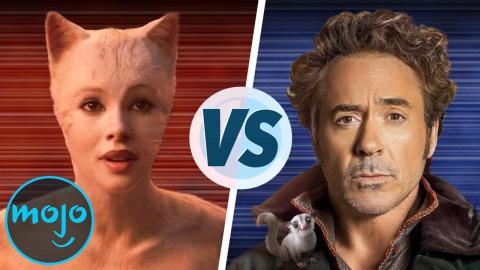 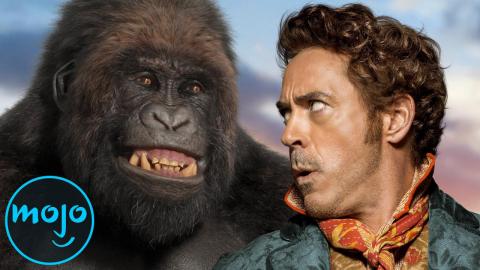 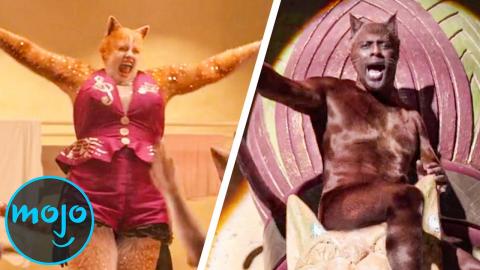 Top 10 Scenes in Cats That Will Make You Cringe 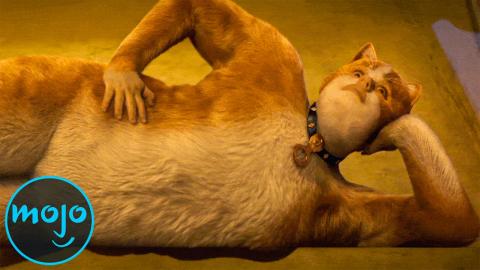 Top 10 Reasons Why Cats is the WORST 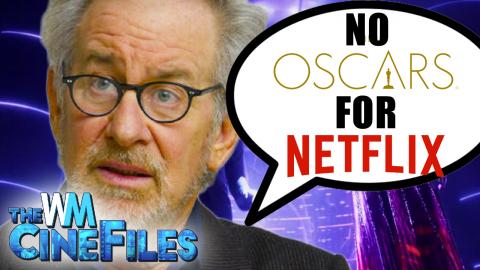 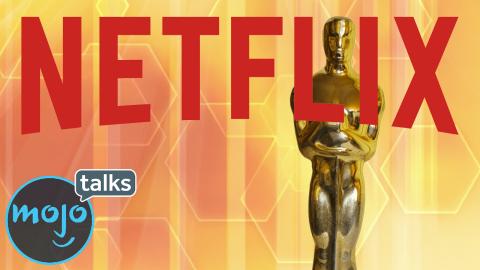 Should Netflix Movies Be Eligible for The Oscars? - The CineFiles Extended Cut 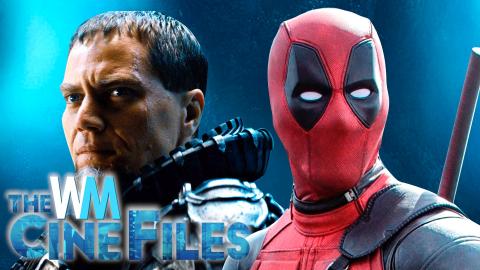 DEADPOOL 2 to Cast Michael Shannon as CABLE? – The CineFiles Ep. 13 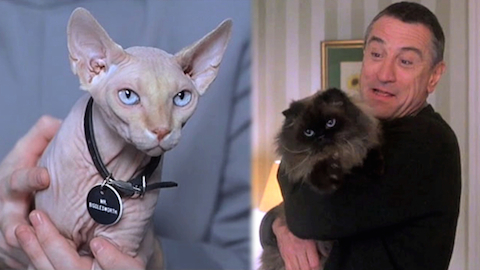 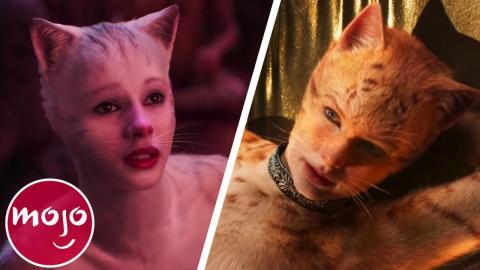 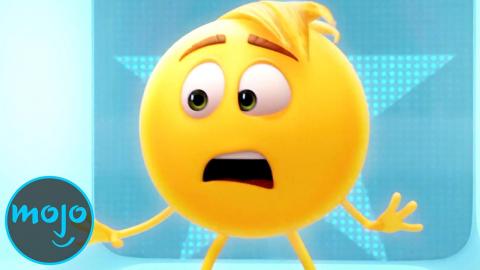 Top 10 Movies That Were Doomed From The Start 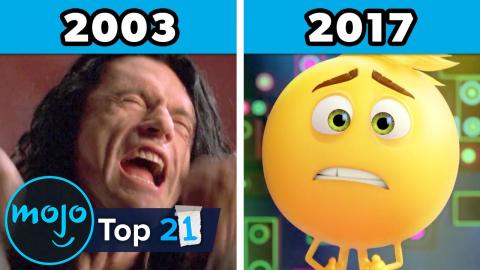 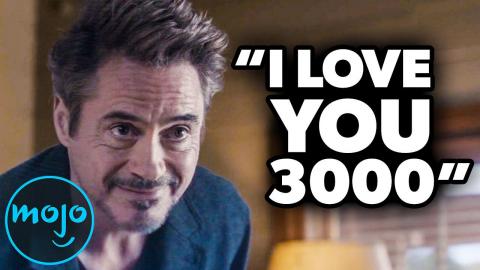 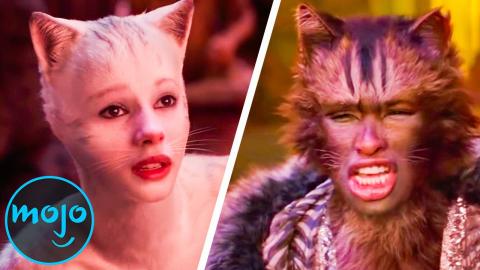 VOICE OVER: Rebecca Brayton WRITTEN BY: Michael Wynands
Films rarely fail as spectacularly as "Cats" and "Dolittle." For this episode of VS., we're pitting "Cats" and "Dolittle" to see which flop flopped the hardest — and which was the WORST. Our countdown includes star-studded casts, incoherent plots, horrifying CGI, and more!
Transcript ∧

Cats vs. Dolittle: Which Is WORSE?


This isn’t how we usually do it, but hey, films rarely fail so spectacularly! Welcome to WatchMojo, and today we’ll be going head to head with “Cats” and “Dolittle” to see which of these two animal-themed movies, released less than a month apart in late 2019 and early 2020, failed more spectacularly. So grab some popcorn and buckle up; this one’s going to be both entertaining and messy.

For his adaptation of the hit Broadway musical, director Tom Hooper managed to line up a stellar cast of talented actors, including Dame Judi Dench, Sir Ian McKellen, Idris Elba, Ray Winstone and Jennifer Hudson, alongside proven comic stars like James Corden and Rebel Wilson. All things considered, this film was in a great position to succeed. But for whatever reason, most of the aforementioned stars are relegated to relatively supporting or bit parts. And while musical numbers by skilled vocalists Jason DeRulo and Taylor Swift are welcome, the known quantities in the cast as whole just feel seriously under- and misused.

“Dolittle” has the good sense to put its biggest money-making star front and center. There are few male leads more bankable than Robert Downey Jr, and as the “Sherlock Holmes” films proved, RDJ’s charms can be applied to more iconic characters than just Tony Stark. Not only that, but in this film he is supported by a truly awe-inspiring list of big name stars, including Tom Holland, Emma Thompson, Ralph Fiennes, Rami Malek, Octavia Spencer, Selena Gomez, John Cena and more. The problem? They’re only offering up their speaking voices to the animal characters. In terms of live-action co-stars, RDJ is joined by the great Michael Sheen and Antonio Banderas, but they’re not exactly faces that young kids — the target demographic — are clamoring to see.

Both of these films were armed with a much better roster of performers than most, but ultimately, “Cats” squandered far more talent. And so it takes the first round!

Even the most gifted performers can turn in a stinker from time to time when they don’t genuinely connect with the material. “Cats” is a decidedly mixed bag in this regard. For example, the aforementioned James Corden and Rebel Wilson’s turns are meant as comedic relief, but there’s a serious cringe factor to their feline antics. Taylor Swift, on the other hand, actually does a great job — however brief her screen time — as the mischievous Bombalurina. McKellan and Dench, for their parts, are as reliable as ever, even armed with silly material. But the real saving grace of this film is Jennifer Hudson’s Grizabella, who genuinely makes you feel for her plight.

We’ve seen Robert Downey Jr. deliver some stellar performances over the years. The guy knows how to work the camera! But the typically reliable thespian, so awesome in iconic roles as Charlie Chaplin, Sherlock Holmes and Tony Stark, never seems to truly find his footing as the titular Dr. John Dolittle. Attempting to play a character that’s aimed at children, he seems to be at a loss for an age-appropriate personality And so instead… he’s just sort of bland. Don’t get us wrong, it’s still RDJ, so it’s totally watchable. But we know how much better he can do. For a guy who can talk to animals, Dolittle feels shockingly two-dimensional, and unfortunately the same goes for his human co-stars.


Thanks in no small part to the colossal efforts of Jennifer Hudson, “Cats” actually has some scenes worth watching. Unfortunately, the same can’t really be said for “Dolittle” . . you’re just not gonna care about these characters. And so “Dolittle” takes it to tie the score up.


Over the years, many a convoluted, mind-bending film has left audiences debating its true meaning. But hey, “Primer”, “Donnie Darko”, “Mulholland Drive”, “The Holy Mountain” - they ain’t got nothing on “Cats”. Okay, that might be a stretch… but still. Unlike the aforementioned films, “Cats” doesn’t ask any big questions or toy with complex themes — at least not that we could catch. Instead, it barrels along from one song to next, and due to the almost complete absence of traditional dialogue, there’s very little in terms of exposition. It all centers around a musical competition where cats compete for a chance at a new life, but… you’ll need to remind yourself of that all throughout the film.


We get what the plot is to “Dolittle” because, well… the one thing that’s most certainly not lacking in the movie is exposition. But just because you spell something out doesn’t make it any less tangential, clumsy or unnatural. While the few positive reviews of this film did praise its fidelity to the source material, simply honoring the original does not a good adaptation make. Some might also say that you shouldn’t hold a children’s film to very high narrative standards, but you know what… even young children deserve something more substantial than this paper-thin plot . . which is probably why they didn’t even bother alluding to a plot in the trailer.

So… that was a pretty scathing indictment of “Dolittle’s” plot. But you know what? At least it had one! And so by this meager margin, it is superior to “Cats”. The singing kitties lose another one of those nine lives.


Let’s just say it: “Cats” is bad. Like… REALLY bad. Even if you, the viewer, don’t have the slightest grasp on how to make a film or write a script, you can tell that something’s gone seriously amiss with this movie. We all can’t help but wonder how many nights Tom Hooper and cinematographer Christopher Ross lay awake staring at the ceiling agonizing over how to salvage this visually frenetic nightmare. Heck… even an alien, armed only with a one-sentence definition of “narrative cinema”, would likely consider this film as missing the mark. In short, it is a cinematic failure of the most spectacular variety. From the plot to the special effects to the pacing, it’s unlike anything you’ve ever seen before. And not in a good way.

“Dolittle” is, in and of itself as a piece of entertainment, a relatively harmless creation. Kids won’t walk away any worse for having seen it; they just won’t have learned anything from it either. Or necessarily cared for it much. But from a filmmaking perspective…it’s a real Frankenstein’s monster. It takes a big name actor, a massive budget, a list of stars a mile long, a beloved children’s character and tries to use them as the glue to hold together a colossally messy pastiche of adventure movie cliches and tropes. It simply doesn’t work. Despite everything that gets crammed into its hour and 31 minute run time, it’s a bore. Approached from any angle, it’s really tough to enjoy.


If you’re going to mess up, at least do it in an interesting way. “Cats” will go down in history as one of the most bizarre big budget failures in the history of the film medium. It is likely to become an ironic cult classic like “The Room”. “Dolittle”, on the other hand, simply fails by every conventional criteria by which movies are judged. And since it fails to ascend to the heights of being “so bad it’s good”, it wins — or is it loses? — this round.


In modern gaming, it’s pretty much standard operating procedure for developers to release updates to fix issues with the game post-release. But such a practice is all but unheard of in film . . . that is, until now. There were apparently such major issues with the CGI in “Cats” that the studio literally sent out an updated version with . . . “some improved visual effects”. Whatever they did, well, it wasn’t enough. The garish computer-generated environments are extremely distracting, as is the inconsistency in how the various actors are turned into cats. Some look like anthropomorphic felines, others seem to just have their human faces (skin and all) pasted on a cat-like body. It’s really confusing and pretty much the definition of the “uncanny valley”.

And sadly, it seems that with advances in computer technology, anything that can be generated in post-production… will be generated in post-production. “Dolittle’s” special effects aren’t particularly awful. They can’t hold a candle to, say, “The Lion King” or “War for the Planet of the Apes”, but they’re, y’know, fine. The thing is… there’s just SO much. And the end result is that, rather than inspiring a sense of wonder, it all just leaves you feeling hollow. As CGI animals navigate CGI environments populated by just a couple of flesh and blood actors, it begins to feel like an animated film, especially when the action picks up.

Uninspired and overabundant as “Dolittle’s” CGI might be, at least it won’t haunt you for years to come. After you’ve seen “Cats”, on the hand, well… all bets are off. How “Cats” got made a full decade after “Avatar” and still looks this bad we’ll never know, but with those effects, it more than earns the round . . . and the competition!