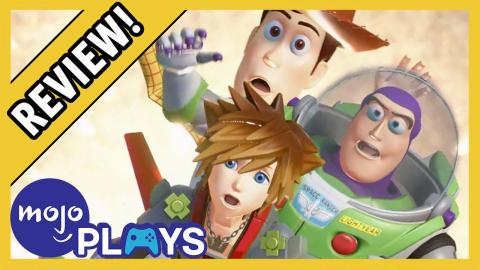 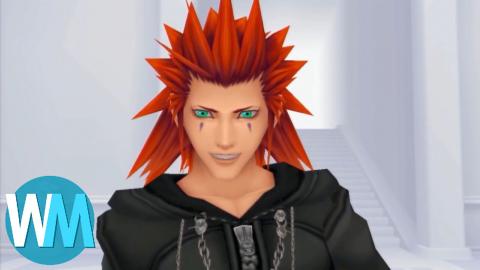 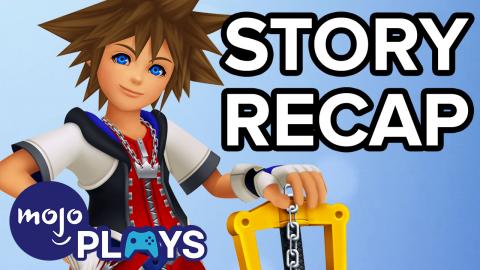 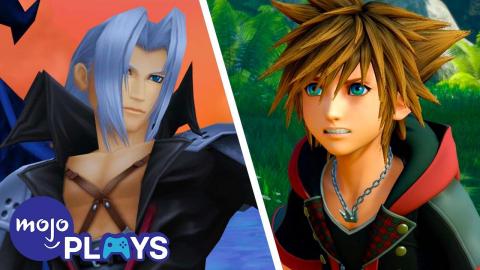 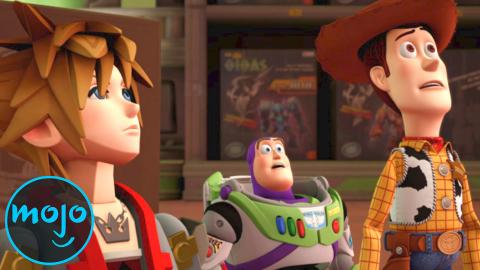 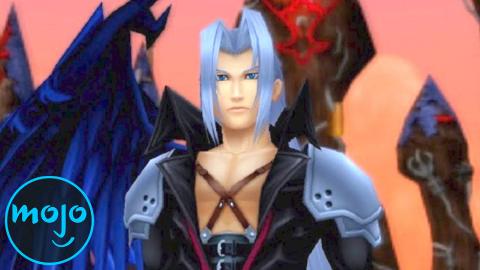 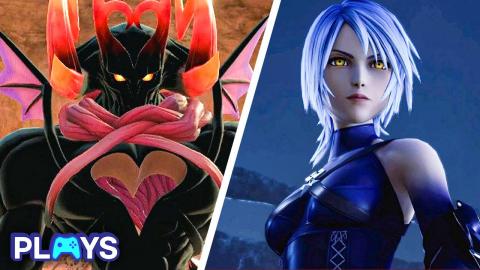 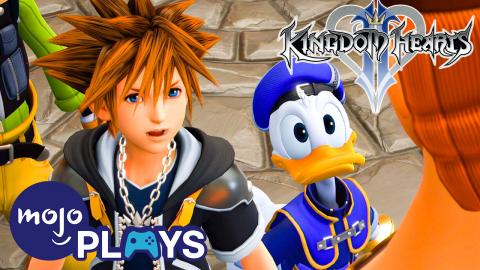 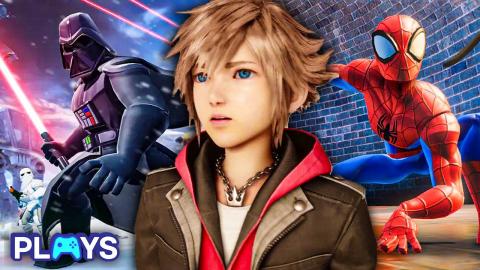 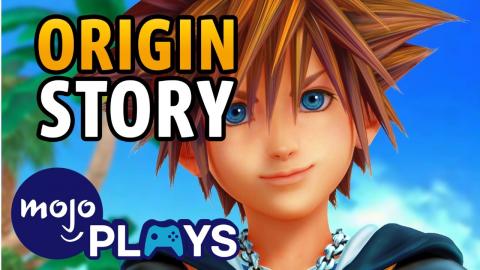 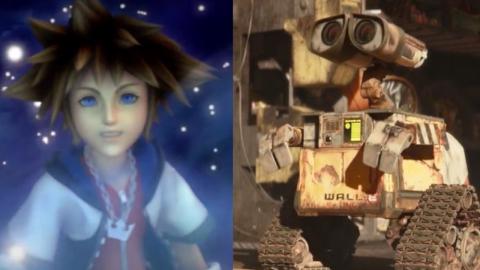 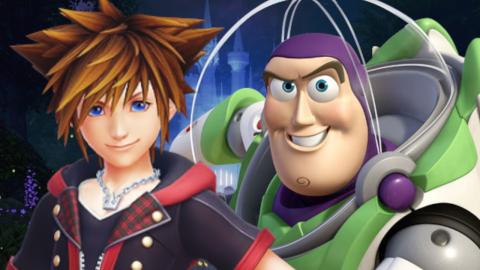 VOICE OVER: Riccardo Tucci WRITTEN BY: Jarett Burke
Kingdom Hearts has some of the most beautiful music in video games. So here are our picks for the best songs from Kingdom Hearts.
Transcript ∧

Disney films already had amazing soundtracks, as does Square’s Final Fantasy series. And the two styles go together like peanut butter and jelly… and we LOVE PB & J’s! Welcome to MojoPlays and today we’d like to talk about some of the best music in the Kingdom Hearts series.

It’s a series known for its beautiful compositions and energetic, upbeat pop tracks, and while we sadly don’t have time to talk about all of them, we'd like to hear what some of your favourites are in the comments below.

Vector to the Heavens

This track slows the pace down a bit, offering a mixture of romanticism and grandiosity that tickles the ear with delight. It’s the kind of song we can picture a prince and princess dancing to in a large ballroom while guests look on in awe… or something like that. Sorry, our imagination gets away from us at times! This track was also composed by Shinomura and can originally be found during the boss battle between Roxas and Xion in “Kingdom Hearts 358/2 Days” on the Nintendo DS and was later remastered for the “HD 1.5 Remix” version and played during one of Xion’s cutscenes. It also makes us want to learn piano…

This track has “EPIC” written all over it… no wonder it was originally used in early trailers promoting the first game’s release back in the Early 2000s and has been used in the series ever since. It’s grand in scope – feeling like it was written for a fantastical battlefield showdown like those seen in the “Lord of the Rings” movies – and it’s highlighted by huge cymbal crashes and operatic singing throughout, giving it that over-the-top flair we love to charge into battle to. In Italian, destati means “awaken,” so the song’s title seems to be alluding to the game’s theme of light over darkness, and we can’t think of a more fitting song to accompany the triumph of good over evil.

This track serves as the musical theme for – you guessed it – the Hollow Bastion stage in the first “Kingdom Hearts” game and was remastered for the “HD 1.5 Remix” version as well. It’s got a fantastical vibe to it that fits in well with the stage’s sense of wonder and larger-than-life environments. And, is it just us, or does the song’s melody kind of sound like John Carpenter’s theme from “Halloween” at a lower key? It’s also appeared in “Kingdom Hearts: Chain of Memories” as well as the DS title “Re:coded,” and has been such a popular song from the series that it’s been remixed a few times and used in later games like the “Reviving Hollow Bastion” tune from “Kingdom Hearts 2” and the remade “Radiant Garden” used in “Birth By Sleep.”

Darkness of the Unknown

This track is made up of three movements and each one is played during a different phase of the final boss battle in “Kingdom Hearts 2” against Xemnas. It’s the perfect soundtrack to head into battle to, as it has a dramatic feel wrapped in a tense, grandiose atmosphere and makes us want to revisit the second “Kingdom Hearts” game immediately. It’s also got a mystical vibe to it, which is the perfect companion to the final battle’s ambiguous environment. Seeing as it’s comprised of three movements, it’s one of the longer songs on this list, so it may not be something you’d sit down to listen to, but it works perfectly well for a video game score.

Fate of the Unknown

This track, despite being one of the better ones in the franchise, actually wasn’t included in the base “Kingdom Hearts 2” version, but was later added to the Final Mix Plus edition of the game released in 2007. In this re-release, “Fate of the Unknown” plays during a secret ending of the game that wasn’t featured in the original. It’s definitely got some victorious, end-of-game vibes, and just feels like a great track to groove along to while watching the final credits roll. Also, its use of the violin lends it a somber tone as well, and what’s more bittersweet than beating a great game? We wish they’d last forever!

Sanctuary is one of the few songs on our list that wasn’t composed by Yoko Shinomura but instead was written and sung by Japanese-American singer-songwriter Utada Hikaru. You may know it by its original Japanese title, however, called Passion, which was released on Hikaru’s “Ultra Blue” album and managed to hit the number-two spot on the Japanese music industry’s popularity chart, Oricon. This song also appeared in “Kingdom Hearts 358/2 Days” and “Kingdom Hearts 3D: Dream Drop Distance” and there’s even an instrumental version of the song that was used during a trailer for the “Kingdom Hearts 2.5 ReMIX” collection. It’s a really catchy pop tune and one we’d totally listen to outside of playing Square’s famed RPG franchise.

Destiny Islands is more in line with what we think of when we think Video Game Soundtrack. It’s a cross between “Super Mario Bros.” and “Donkey Kong Country” and is a real toe tapper! It’s simple, light and playful, and is the perfect score to the Destiny Islands area of the first “Kingdom Hearts” game. Above all else, it just really makes us happy to listen to… We’d like to kick back on a tropical beach, margarita in hand, and watch the waves roll in to this happy tune. It’s a pretty popular song too, seeing as it appears in five other “Kingdom Hearts” games outside of the first one, including “Kingdom Hearts 2” and “Birth By Sleep.”

Dearly Beloved is considered by many to be the main theme for the entire “Kingdom Hearts” series and is an all-time fan favorite that even non-fans of the RPG Franchise know -- we like to think of it as the “Free Bird” of video game tunes. It plays during the main menu of the first game in the series, and can be heard – in one form or another – in most games in the franchise. It’s quite a short track, clocking in at just over two minutes, but when looped it could literally play on forever and we’d love it all the same. The Reprise version of the song featured at the end of the first game is a simplified take on the original, and would make a great bed-time song. Just try staying awake to this lullaby…

Like Sanctuary, this tune was written by Utada Hikaru and has a much more upbeat/pop feel to it compared to the more classical songs on this list composed by Yoko Shinomura. It originally appeared on Hikaru’s “Deep River” album under the title Hikari and was later featured in the Japanese version of “Kingdom Hearts.” In the North American version of the game, however, the song was re-written and titled Simple and Clean. This song’s also been re-recorded in orchestral form and used in many of the franchise’s titles since the release of the first game. Whatever version of the song you listen to, it’s a real crowd please not only for “Kingdom Hearts” fans but music fans in general.
Comments ∧