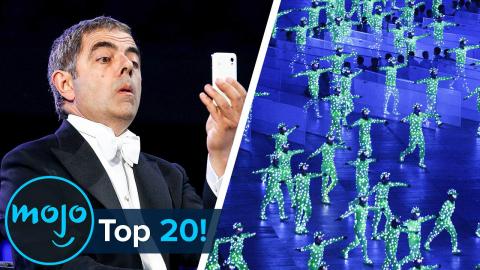 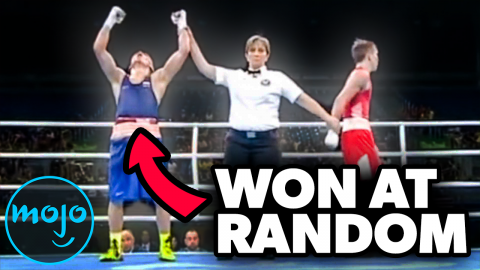 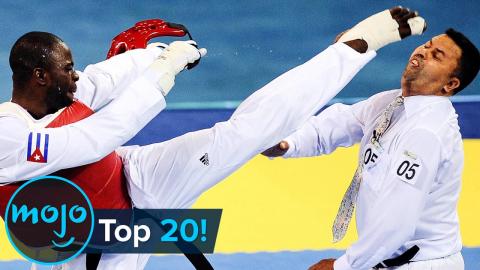 Top 20 Most Scandalous Olympic Controversies Ever 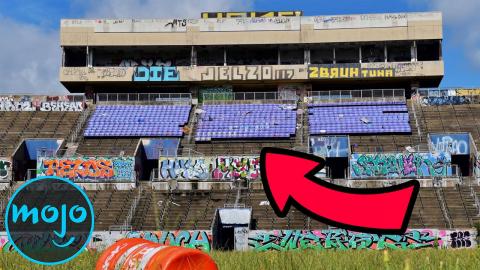 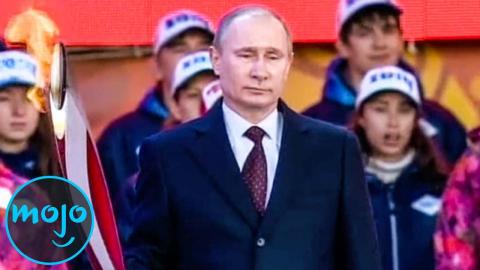 8 Times Countries Were Banned from the Olympics 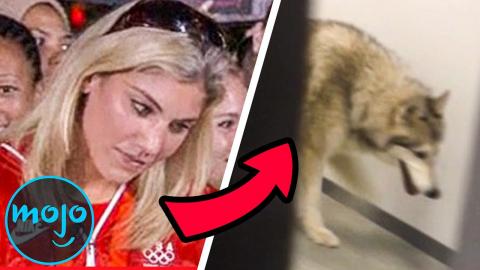 Top 10 Weirdest Things To Happen In The Olympic Village 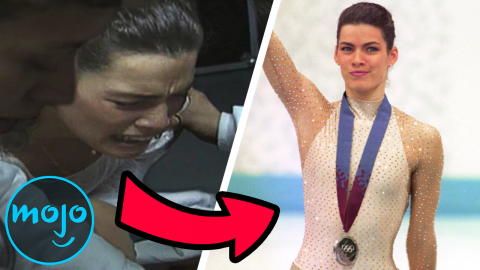 Top 10 Most Amazing Come From Behind Wins at The Olympics 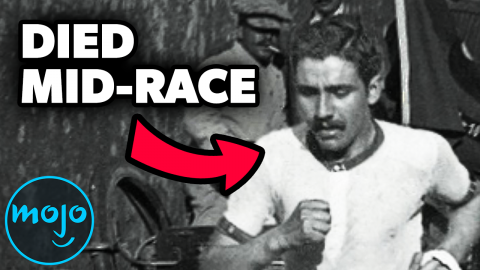 The 10 Most Shocking Olympic Tragedies 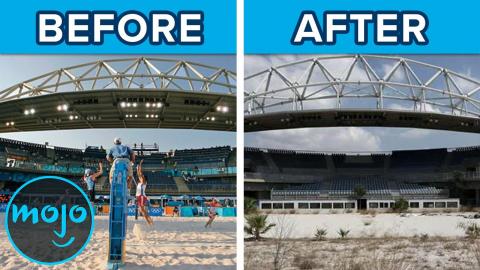 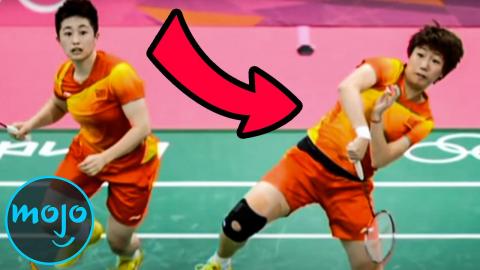 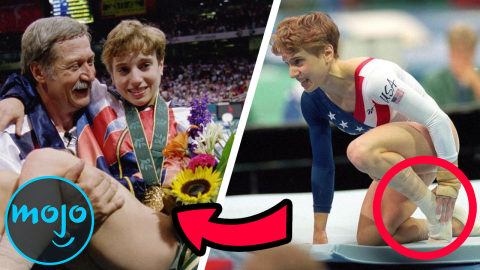 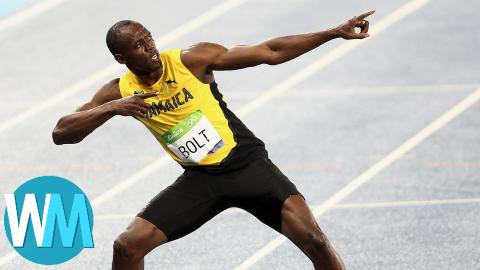 Top 10 Inspirational Moments From The Olympics

“The Games” are never short on drama. Welcome to WatchMojo.com and today we'll be counting down our picks for the Top 10 Olympic Controversies. For this list, we're taking a look at the most notorious instances of cheating, violence and political maneuvering from both the summer and winter games that have generated worldwide discussion and debate.

Special thanks to our users TheLikeGroup for submitting the idea using our interactive suggestion tool at WatchMojo.comsuggest
Transcript ∧


“The Games” are never short on drama. Welcome to WatchMojo.com and today we’ll be counting down our picks for the top 10 Olympic Controversies.

For this list, we’re taking a look at the most notorious instances of cheating, violence and political maneuvering from both the summer and winter games that have generated worldwide discussion and debate. We’re excluding tragedies like the Munich massacre of 1972 and Atlanta’s bombing in 1996 as there is little dispute about the causes and results of those incidents.


As a distinguished yet aging modern pentathlete and respected figure in the Soviet Union, 38-year-old Boris Onishchenko had a considerable reputation to uphold in his homeland. The pressure to perform, particularly in the Cold War era of sport, was too much to bear however, and caused the former army major to cheat, eventually leading to his downfall. Desperate to match his silver medal performance of four years prior, he altered his épée to register hits even when he wasn’t making contact with his opponent. Just as quickly as this plot was discovered, “Boris the Cheat” was stripped of all his sporting honors and personally reprimanded by Soviet leader Leonid Brezhnev, therefore suffering the very fall from grace he was trying desperately to avoid.


Reportedly dubbed the greatest athlete in the world by the King of Sweden, this legendary all-rounder took gold in both the pentathlon and decathlon at the 1912 Summer Games, setting records that would endure well into the 20th century. The Native American and European’s athletic career is defined by tales of his nonchalant excellence – his winning the high jump in mismatched shoes is one of many classic anecdotes - yet his feats will always be tainted by the IOC’s elitist and potentially racist attempts to punish him for violating their Victorian rules on amateurism - rules that white athletes apparently frequently abused without consequence. Under serious pressure from Thorpe supporters, the IOC did eventually yield in some part by returning Thorpe’s medals in the early 1980s.


As far back as 2000, Chinese officials were implementing “environmental improvement projects” – a fancy phrase for the systematic demolition of Beijing’s impoverished areas – resulting in the displacement of an estimated 1.5 million people for the 2008 Summer Games. Although the local government claimed that they moved only between 6,000-15,000 people, all with ample compensation, numerous reports emerged exposing the mistreatment of those unwilling to shift by heavy-handed police. Beijing’s “floating population” – rural migrants, homeless and other second-class citizens – were most at risk from this purported “social cleansing” as the government took the opportunity to further marginalize those people. It was reported that $40 billion was spent on Olympic or corporate infrastructure, while human rights were allegedly blatantly ignored, adding to an already large list of controversies surrounding the Beijing Games.


Just a few weeks before this water polo match, Soviet tanks had rumbled into Budapest to end a revolution that would claim the lives of about 3,000 Hungarians. With the hopes of restoring their country’s pride, the Hungarian team devised a plan to rile the Russians up, get physical and force them into rash decisions. With Hungary leading 4-0 late in the game, the Russians decided to take things into their own hands: Hungarian player Ervin Zador was viciously struck in the eye, sending the hundreds of Hungarians in the crowd into a frenzy that required police intervention to end. In a bittersweet end to their games, the Hungarian team took home the gold, but they never could escape the match’s political subtext, forcing many team members to find refuge in less oppressive lands.


Details of state-sponsored systematic doping in Russia really came to light in 2014. But they were dramatically expanded upon when a former Russian anti-doping official, Grigory Rodchenkov, provided an insider’s look into a conspiracy that forced him to flee to the USA in fear for his life. Exploiting the increased access granted by hosting the games, competitors in Sochi were allowed to dope without consequence while their tainted urine samples were exchanged for clean ones in covert operations carried out by Rodchenkov and other shady experts. He claimed that at least 15 medal winners from the 2014 Winter Olympics might be implicated. As a result of these elaborate, supposedly Kremlin-sanctioned schemes, Russia was indefinitely suspended from world sports events and many of its athletes may miss 2016 Summer Olympics in Rio.


The Men’s 100 Meters at the 1988 Summer Olympics in Seoul may have been labeled “the dirtiest race in history,” but it was also one of the most enthralling to watch. Six of that all-star lineup would become implicated in other doping controversies later in their careers, but it was Johnson, the world record holder after his 9.79-second race who will forever be defined by the steroid use he began in 1981. The Canadian was open about his long-term cheating and was rightly stripped of his gold medal, yet to this day he is irked to be the only one punished when the other athletes also failed drug tests. He has even made conspiratorial claims declaring that the IOC only selectively cracks down on the pervasive doping culture in athletics – but even if Johnson’s allegations are true, we may never fully know.


It’s no surprise that a feature-length film about this sensational incident is in the works. Containing jealousy, a hit man, and an unrelenting desire for sporting success, the tale is ready for a big-screen adaptation. After practice for a national championship that was crucial to determine the US Olympic figure skating team, a thug hired by Tonya Harding’s ex-husband and bodyguard struck Nancy Kerrigan in the leg. Since she was essentially the poster girl of the sport at the time, the attack was orchestrated to intentionally put her out of the '94 games. Branded as the hard working, “do anything for gold” skater, Harding’s alleged knowledge of the attack was soon exposed by the media. However, she was still allowed to perform at the Olympics. Fortunately, Kerrigan recovered from the botched attack and landed the silver at the Lillehammer Games, while Harding placed 8th, was fined, received 3 years of probation and never skated competitively again.


In response to the Soviet invasion of Afghanistan beginning in 1979, U.S. president Jimmy Carter led an international boycott that doomed his period in office and triggered the Soviet Union’s own Olympic boycott of the L.A. games four years later. While the reasons behind this action were righteous and well supported – with the US enlisting the help of Muhammad Ali and ultimately 65 nations joined up – the boycott threatened the Olympic Movement by embroiling the Games in the political maneuvering of two world powers. 25 angry U.S. athletes even sued the government for denying them a dream they worked so hard towards - and yet Carter stuck to his morals, strengthening a stance that would later be described by the Soviet Union as “anti-Soviet hysteria”.


It’s one of the most powerful images of the 20th century and a demonstration that has transcended many sporting events and achievements. In the medal ceremony for the 200m race at the 1968 Summer Olympics, Americans Tommie Smith and John Carlos, who were shoeless and had their heads bowed, each thrust one gloved hand in the air. Smith said that the salute was meant to symbolize human rights for all, though it was taken differently by others, who believed it was actually in support of “Black Power.” Both athletes were expelled from the Games and greeted with hostility when they returned to America. However, they stood by the blatantly political statement, claiming it was their moral obligation. In a climate where it was dangerous to be openly critical of the establishment, these men sacrificed their individual reputations to send a message to the millions watching at home.

Before we unveil our top pic, here are some honorable mentions:

For two weeks in 1936 Berlin, the world was blinded by Nazi prosperity and hospitality world was blinded by Nazi prosperity and hospitality, while Germany’s precisely directed propaganda campaign obscured the country’s anti-Semitic, racist, homophobic and expansionist policies from view. As numerous nations that would later form the allied powers lapped up every carefully manufactured demonstration of fervent German pride, arguments that stated that participation in the Games would be tantamount to an endorsement of fascism went unheard. And so despite the surfacing of movements to boycott, the Games went on as planned. Medals were even won by some Jewish and black athletes, but it was Hitler who truly prospered. The Reich Chancellor managed to turn the Games into a political affair and successfully manipulated European powers into a complacency that would allow the Nazi regime to spread across Europe in the years to come.
Comments ∧